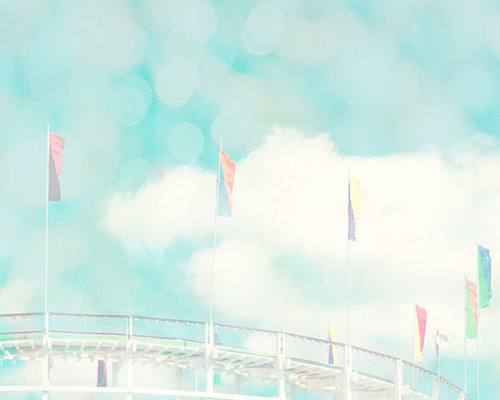 By Gabrielle. Dreamy roller coaster print via The Gingham Owl.

This Growing A Family story reads like a roller coaster ride. There are many highs that made my stomach leap and a few lows I could feel in the back of my throat, and I just couldn’t seem to catch my breath throughout. I’m hoping beyond all hopes for an easy, happy finish, with arms raised and a triumphant “We did it.”

My husband Andrew and I adopted our three children in August 2014, but the journey to becoming their mom actually started in 2005 when I was just 20 years old in an orphanage in Quito, Ecuador. One of the nannies in an orphanage I was visiting asked me if I could watch her room full of kids for a few minutes and as soon as she left, all the kids seemingly at once started trying to crawl on my lap, begging for my attention at the same time. I burst into tears and decided in that moment that I would some day adopt kids that needed a family.

I know it’s usually assumed that when people adopt it’s because they have struggled (sometimes for many years) with infertility. But that wasn’t the case for us. It isn’t long after we meet people that they start asking questions about why we adopted three kids (maybe because my husband and I are younger…first becoming foster-adopt parents when I was only 26).

In 2012, my husband and I decided we were ready to grow our family beyond the two of us, and so we started trying both the traditional way and also looking into adoption at the same time. We believed that God would graciously give us the children we were supposed to have, so we didn’t put limits on anything.

About six months later, we were still pursuing both ways of growing a family, and I had a few foster kids as students one year (I am also a special Ed teacher). Through getting to know them and their stories, I asked my husband if foster adoption was something we should look into (rather than traditional domestic or international adoption). Long story short, he said yes, I Googled “foster to adopt,” I called the first agency that popped up in our area, and six months later we were certified and became parents to two sweet boys. We tend to be the type of people that don’t overthink anything, but just go with whatever falls in our path, believing each step to be a gift — even the hard parts.

As you probably suspect, foster adoption is such a roller coaster. You pour your heart into each and every child that gets placed in your home, you do the work of becoming attached to that child, because that’s really what every child deserves — loving and fully attached parents — and then one day, you have to say goodbye and it rips your heart out. This is what happened with our first two boys, and a third baby we also fostered for a short time.

The one reason people always seem to give us for not wanting to foster — we’ve never asked anyone to give a reason but people always feel compelled to! — is that they would get too attached. But what I want to tell them, is that is exactly what every foster child needs: parents who will get attached!

Back to our story. The night that our third foster baby left us was a crazy one! The social worker had told us they were taking him for a visit with his birth mom and then they never brought him back. I called around 6:00 pm and the social worker forgot to tell us that they decided to put him in another foster home closer to where his birth mom lived.

My husband and I were devastated. We still had all the clothes we had bought him, his bottles, and we didn’t get to say goodbye. After finding this out, my husband said God was going to have to make it very clear if He wanted us to take another foster baby. A few hours later, we got a call from our foster agency who asked us to take a two-week old baby girl. We found out her name was Shekinah, which means “Glory of God,” and so of course we said yes! How could we deny the glory of God a warm bed in our house that night? :)

Shekinah was dropped off at our house at 2:00 am that night, and the moment I held her, I felt the deepest connection to her. I prayed one of my bravest prayers ever, that God would allow her to be mine forever.

At this point, we still had the two boys that first made us parents along with Shekinah, but we knew their time with us would be coming to an end soon as they were on the path to being reunified with their birth mom.

Five months later, we found out the boys would be leaving us and in the same week, we found out Shekinah’s two full biological siblings, Zaniah and Isaiah, who had been in a “permanent” foster home were being removed from that home and needed a new home…so could we take them? It just so happened that they were the exact ages of the boys we had, so we already had the right beds, rooms set up, everything. And most importantly, it meant Shekinah would get to grow up with her biological siblings. She hadn’t even met them at this point.

See what I mean about how foster adoption is a roller coaster? A roller coaster with so many hard and perfect gifts along the way. And little did we know at that time just how long the ride would be or where it would take us.

A few months later, we had all three kids together for the first time ever and about a year later, we finalized their adoptions in court. It was truly the happiest day of our lives!

In July 2015, we got an unexpected call from our foster agency that a baby boy needed a foster home. We felt it was the right time for our family to begin fostering again, so I went to pick him up from the hospital where he was born and had been waiting in the NICU for a family. The nurses wheeled me out carrying a nine pound perfect bundle of joy and upon arriving home, this sweet baby boy was immediately embraced by our entire family and extended family.  From day one, our older three adopted children have bonded with him, fallen in love with him, and considered him their brother. In May 2016, we were named his perspective adoptive parents and were set to sign his adoption papers in July 2016.

In the beginning of October 2015, we received another unexpected call that the birth parents of our three adopted children had had another baby girl who was four weeks old at the time we found out. Although we realized raising two babies who are just two months apart in addition to our three other children would be a challenge — this would make parents to five kids under six! — we also felt in our hearts that we should bring her into our growing and loving family.

Part of the deciding factor was remembering how much our oldest two children (Zaniah and Isaiah) had been through before being placed with us, each of them living in four different homes before coming to us as their forever home. We could not imagine this new baby girl having to go through similar trials as they had to endure before they came to us. We wanted her to have a stable and loving home as soon as possible, and for her to grow up with her biological siblings, and so we said yes and she was placed with us a couple of weeks later.

At the beginning of this summer, life was proceeding as normal and we were expecting to finalize the adoptions of both babies by the fall, when our baby girl shockingly fractured her leg. However, we did not see it when the fracture occurred, only noticing her symptoms which prompted us to take her to the hospital. The doctor who examined her assumed the worst of us, being her foster parents, and stated in his report that it was a highly suspicious injury. That same day, CPS came in while we were still in the hospital with our baby girl, and decided that both babies should be removed from our care immediately since they are both dependents of the state.

We are now in the fight of our lives to regain custody of both babies. Thanks to a kind judge’s order and an extremely gracious foster family, we are able to visit the babies every day for several hours. We have hired an experienced attorney and been granted a trial where we can have a second opinion doctor testify on our behalf, which we are currently awaiting in the near coming weeks.

For now, the ending of our our family’s story still remains to be determined. We have been told that most foster parents don’t fight so hard for children that are not legally their own because when you are facing the county, the easier option is just to walk away. While every day is a choice to risk all we have to bring them home, they are worth it!

I have learned so much about my strength as a mother and the strength of our family and extended family. We have all grown in faith and character and endurance in countless ways. We have such hope and confidence that God will bring our babies home to us and give us a beautiful ending to the story of how we have grown our family.

Holly, I am wishing your family peace and happiness. Thank you for sharing your story with us. Also, Holly’s family is accepting donations via Go Fund Me, if you’re so inclined.