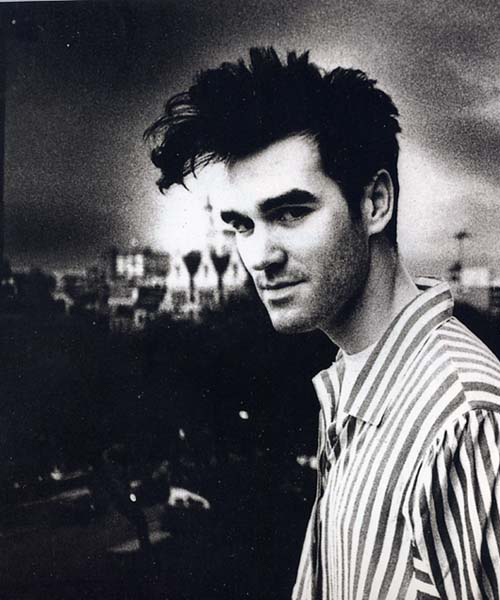 What a funny day it’s been. We had a random power outage for most of the work day, leaving me with nothing to do but dishes. Hah! So here I am, minutes from the end of my work day, and happily sitting down to write a post. Because there’s a question I’ve been curious to ask you all day long!

This morning, I saw a photo of Morrissey in somebody’s Instagram stream. And when I saw it, it sparked memories of my first concert: Morrissey performing in Las Vegas. I was 16 years old.

I guess when I say concert, I should clarify that I mean first rock concert, the first concert I bought tickets for myself. I’d certainly been to other musical events prior to that concert, but this was different, felt much more independent, and was the first of dozens and dozens of concerts I’ve attended through the rest of high school, college, and throughout my whole adult life — Nirvana and They Might Be Giants and Jane’s Addiction and Brandie Carlisle and Justin Timberlake and The Cure and The Killers and Sufjan Stevens and Sting and James and on and on.

For that first concert, I went with my friend Robyn. Las Vegas was about 2 hours away by car, and we drove there in Robyn’s car with my older brother Josh and two other boys from school — Kerry and AJ. The concert was on the UNLV campus and the auditorium was maybe 75% full. I was blown away. I hadn’t really known what to expect, but I loved it. Once the concert was in full swing, everybody left their seats and moved as close to the front as they could. At one point, an audience member jumped on stage, past security, and hugged Morrissey while he sang! From that moment on it was a steady stream of people hugging Morrissey — some with tears running down their faces as they came face to face with one of their idols. My brother and Kerry and AJ all hugged him, but Robyn and I were too chicken to jump on stage.

My older brother had introduced me to the music of Morrissey and The Smiths when I was in 6th grade, so I’d been listening to their music for many years, and this concert felt like such a prize. I couldn’t believe how lucky I was!

After the concert was over, it was late, but we were all awake as can be and drove back to St. George that same night.

Thinking about that concert made me wonder: What was your first concert? Was it rock, pop, singer/songwriter? And have you been to many concerts, or few, or none at all? How old were you when you went? Was it what you expected? I’d love to hear!

P.S. — When I was at dinner in Washington D.C. — the trip where I lobbied Congress — we talked about this same thing and it was so fun to see if that first concert reflected the current personality of the person who attended.