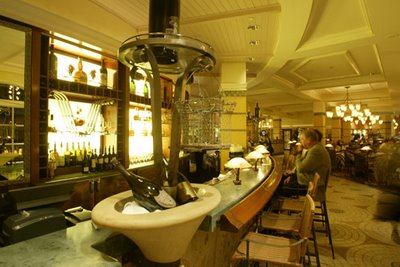 Last Wednesday I was invited to attend a dinner at the James Beard House. I am kind of an idiot. And had never heard of James Beard. Or his home. And just figured it was the name of a restaurant. And then I arrived at the Village address, walked into the brownstone and realized it was in fact a home. The former home of James Beard. Still very homelike.

From what I could gather from the other attendees, James Beard was the first real voice to say: Hey! American Chefs and American Cooking should be great and celebrated. And now there is a foundation that bears his name and give awards to the best American Chefs each year. In fact, I was told receiving a James Beard award is like getting an Oscar for cooking. So that’s James Beard.

Now back to his house. After his death, the foundation made the brilliant decision to use his home for special meals. If I understand correctly, great American chefs (from all over the country) are invited to come to the James Beard House to show off their mad kitchen skillz. And then an assortment of press and foodies and such are seated throughout the main floor of the house and get to enjoy the meal. Very cool. I can’t believe how enamored I am with the image of all these amazing chefs coming to the same small kitchen to prepare their best recipes. Lovely. 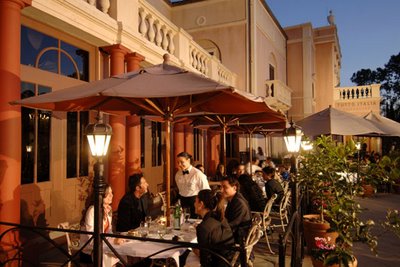 But enough with James Beard. Let’s talk about the meal I attended — cooked by the superstar chefs from Disneyland and Disneyworld. I should clarify right up front that I was not worthy of this meal (no one that shows up at the James Beard House with no knowledge of James Beard could be worthy of the gourmet-ness of this feast).

There were 6 courses. Each one prepared by a different chef from Disney’s signature restaurants. And each course with a distinct style:

Hors d’oeuvres by Chef Gloria Tae of Golden Vine Winery at California Adventure. There were 3 different kinds. I liked the Shrimp and Sweet Pea Tartine with Candied Garlic and Lemon Relish the best.

First Course by Chef Jens Dahlmann of California Grill at Contemporary Resort. Did you know asparagus comes in white and can be whipped to the texture of mashed potatoes only about a thousand times lighter? Yummy.

Second Course by Chef Tim Keating of Flying Fish Cafe at BoardWalk Resort. I have to spell this one out because it was my particular favorite — Fennel Pollen-dusted Wild North Atlantic Turbot with Maine Lobster, Celery Root, Leeks, and Fennel with Tahitian Vanilla-Hazelnut Emulsion and Montegottero Hazelnut Oil. It was so, so yummy. I had to use all my willpower not to lick the plate.

Third Course by Chef Andrew Sutton of Napa Rose at Grand Californian Resort & Spa. He served sonoma duck with roasted baby vegetables. This was my first duck. (Weird that I hadn’t tried duck before, no?) It was amazing. And I wanted to sneak some into my purse so that I could share with Ben.

Fourth Course by Chef Scott Hunnel of Victoria & Alpert’s at Grand Floridian Resort & Spa. This was a veal tenderloin with golden tomatoes and garlics roots and shoots. And I should note here that these 6 courses were not tasting courses — these were full, generous servings. So you can imagine by the time the gorgeous and delicious tenderloin arrived that I was realizing I should have paced myself earlier on. Because it was so flavorful, and satisfying, and I hated to leave even one bite on my plate.

Dessert by Master Pastry Chef Erich Herbitschek of Grand Floridian. What can I say? There was cream. There was bittersweet chocolate. There was sorbet. There was caramel-chocolates with sea salt. And more. And even more. And I loved every spoonful. 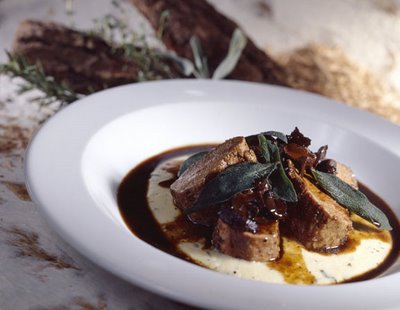 For those of you who grew up eating nothing but churros and fast food hamburgers at Disney Parks (like me), it might be kind of a revelation that there are 5-star dining options at Disney complete with celebrated Chefs. But there are. And there are lots of them — there’s even a Zagat guide dedicated solely to Disney restaurants. If you want to try them (and you should so try them), I recommend calling ahead early for a reservation. Because these restaurants are hot. And fill up fast. 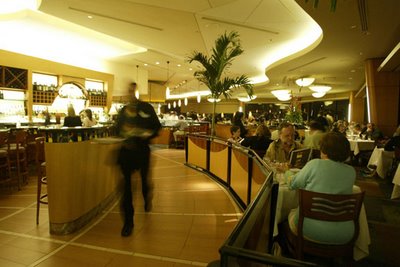 Anyway. The meal was such a treat. Treat as in yummy and treat as in a cool experience. I was seated with wonderful people — seated in the very spot where James Beard kept his bed. (And yes, there were mirrors on the ceiling over the bed area. Not kidding.). The conversation was great. I was able to meet the Chefs and compliment their work. And I was sent home with a gorgeous Disney cookbook. What more could I ask for?

Everything Is Worth Doing Poorly