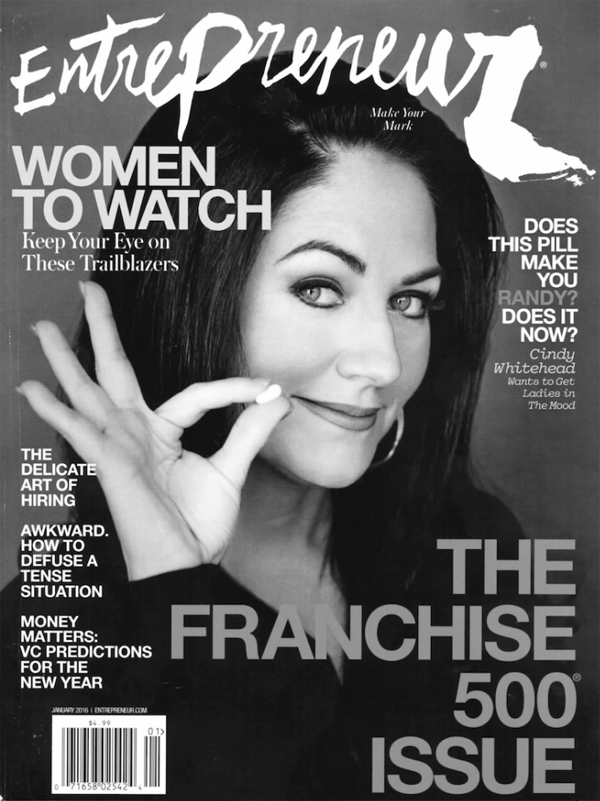 Over the weekend, I was in Austin, Texas at the BE Conference; I just got back last night. I met a lot of really amazing women while I was there (including Kristen Bell!), and one of the things I’m still thinking about is female viagra, which I didn’t even know existed until yesterday.

In one of the morning panel’s, we heard from Cindy Whitehead (pictured on the magazine cover above). She brought female viagra to the market. The panel wasn’t actually about female sexual desire at all, it was about how to raise money and get your business funded. So she was telling her story and how difficult it had been to go to VC companies, which are almost entirely run and staffed by men, to take her pitch seriously. Lots of giggling and snickering by rooms full of men who didn’t believe female viagra was a product that would really have an audience, and despite the data, didn’t want discard their cultural baggage and learn that lack of female sexual desire can be tied to a physical problem.

She talked about how as a society we like to think that once you close that bedroom door, the sexual experience for men is 100% physical, and the sexual experience for women is 100% psychological. But how in reality that’s not true at all, and that both men and women deal with both psychological and physical issues in the bedroom and that we’re not as far apart as people think.

She told us about the fact that there were 26 different medicines available to help with male sexual desire, before there was 1 medicine to help women with sexual desire.

She said that 1 in 10 women — across the world (it’s not a cultural thing, it’s a human body thing) — have sexual desire issues 100% connected to physical issues that can be helped with medicine.

She talked about one instance, where she was presenting to an auditorium of men and she realized the snickering was getting louder and louder. So she flipped through her slides till she got to an image of two brain scans, showing a female brain with normal sexual desire and one with impaired sexual desire. And then she stood there silently until the giggling had died down, and she said, “Are you seeing what I’m seeing?”

She persisted. She knew she could help a lot of women, she got the funding she needed to bring the product to market. Eventually, she sold the company for a billion dollars.

As you can probably tell, I was clearly super fascinated by her story and wanted to discuss two aspects with you. First, did you know about female viagra? Or that 1 in 10 women worldwide deal with lack of sexual desire based on a physical problem? I had no idea! Also, how do you feel about the cultural idea that sex is mostly a psychological experience for women and physical one for men?

Second, have you ever had to present a topic about women to a room of men, where they simply couldn’t relate? Her story is yet another reminder to me about how important representation is. If females are 50 percent of the population (which we are), then we simply must have more representation at all levels of business and government.

P.S. — Girls & Sex. This book is one of my favorite recent reads about female sexuality. Have you read it? We discussed it here.