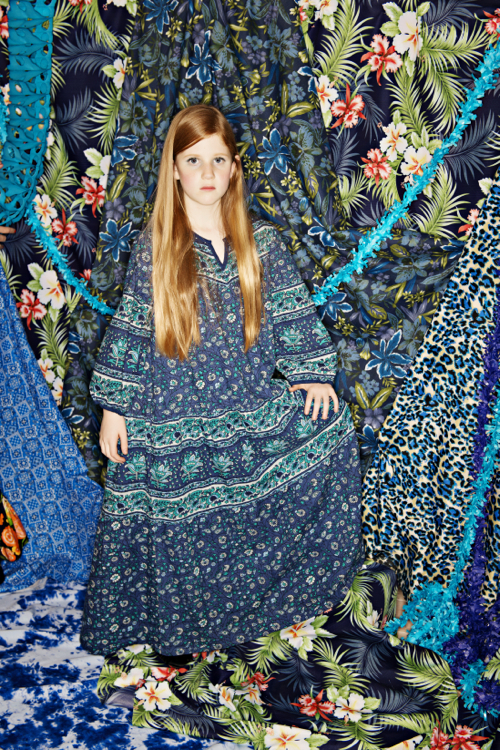 Look at these crazy photos of my family!

You may have seen them already, because I shared some of these on Instagram in December — just a couple of days after the photoshoot. But I just realized I never shared them here on the blog. Which completely shocks me when I think about it, because I LOVE how these photos turned out! I feel like they are one of my best collaborations ever and I’m over the moon that I get to share them with you. Here’s the story of how they came about — including all the thinking and work that happened behind the scenes.

Last fall, Wendy of Blue Lily Photography emailed me. She told me she was headed to Oakland in December, and I said, “Let’s do a photo shoot! Something awesome!” Wendy was the photographer for June’s newborn photos, and she shot our Vintage Car holiday photos too. It’s always fun to work with her especially because she doesn’t seem to mind if I think up crazy ideas. 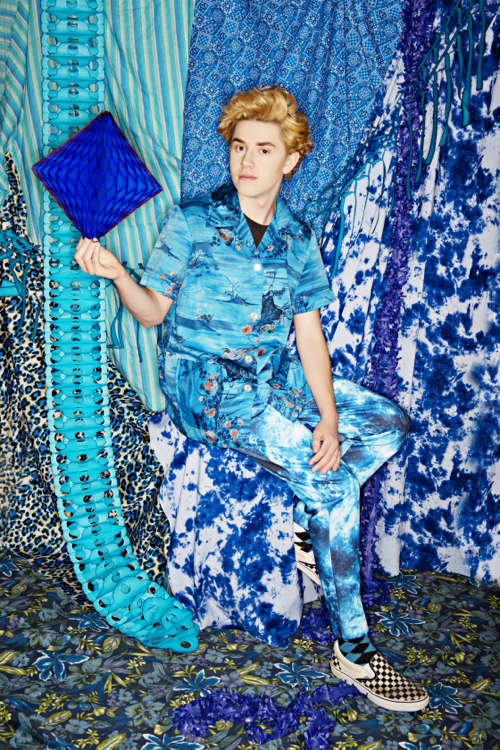 Before I worked on Design Mom, we would generally get a family photo shot about once each year. But these days, we end up taking family photos a few times a year — partly because of work-related requests and partly because it’s hard to pass up the chance to work with amazinly talented photographers! So when Wendy reached out, I wanted to use the opportunity to try something new. 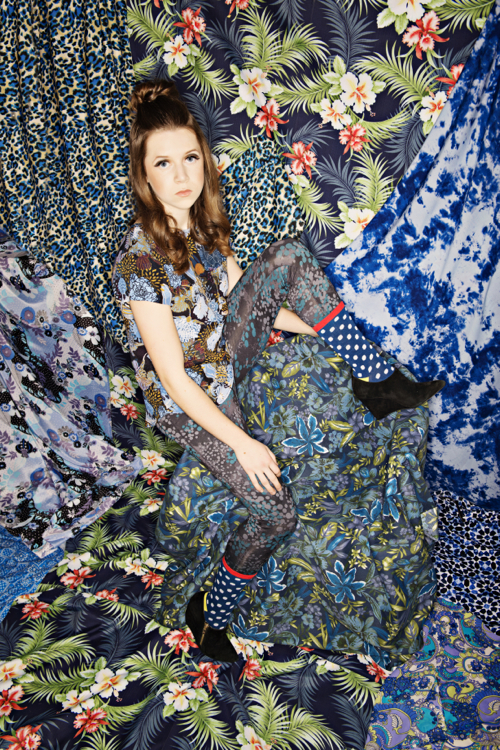 I collect photo inspiration on Pinterest throughout the year, and in 2015 I had been particularly drawn to photos that featured patterns-on-patterns-on-patterns. So I sent a few pattern-filled photos to Wendy and said, “What do you think about something like this?” She gave a big thumbs up and we put a date on the calendar for early December. 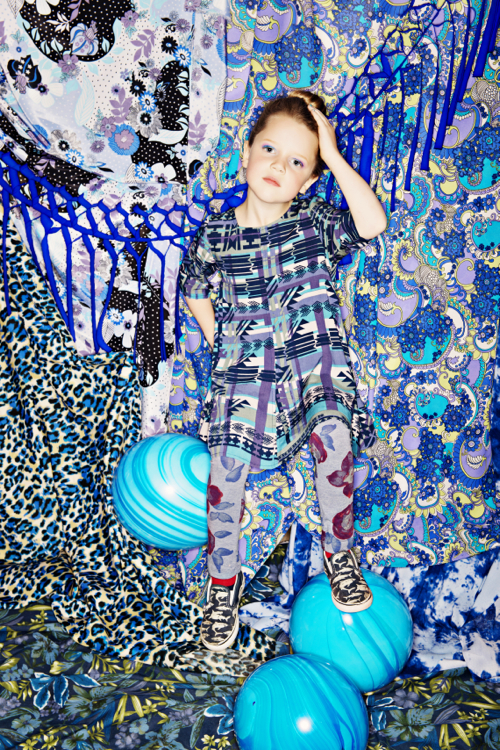 At that point, I pretty much forgot about the whole thing because October arrived and as you know, once October hits it’s one big wave of holiday — Halloween-Thanskgiving-Christmas-NewYears, and the holidays also coincide with lots of Alt Summit deadlines too. So you can imagine my panic when Wendy emailed again to confirm, about a week or so out from the scheduled shoot, and I realized I had done exactly zero preparation. 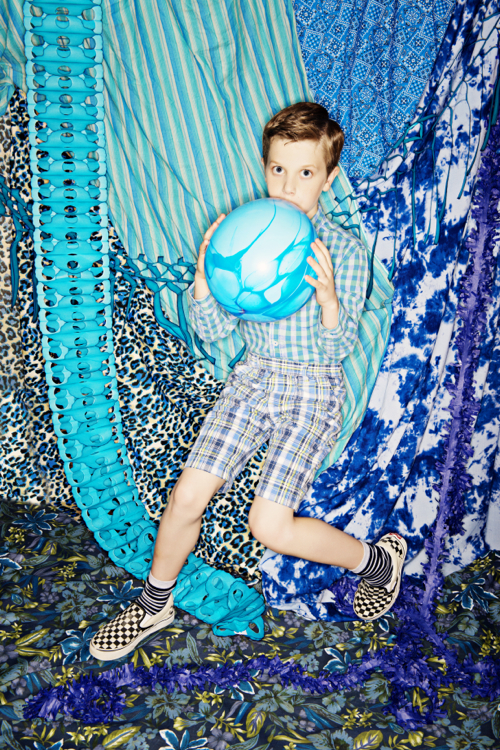 There was a part of me that wanted to cancel, or just go with something easier, something straightforward. But ultimately, I knew I would regret it if I didn’t at least try. And no surprise at all, once I made even the littlest effort, I started getting all sorts of energy and enthusiasm and forward motion for the project. I love when that happens! 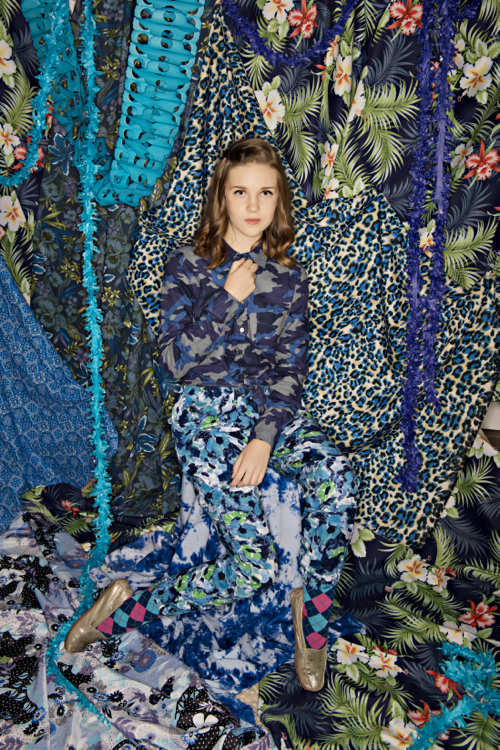 The trick was that I only had a few days to bring everything together. The first stop was our closets. I pulled out everything that had all-over pattern. Next, I hit thrift shops. I didn’t have anything in particular in mind, again, I was just looking for anything with lots of pattern. After that, I set everything out and stepped back and really studied it all for awhile. At that point I had several color palettes going on and was considering using a different one for each person. But I realized I didn’t have time to pull that off and that I needed to choose one color. 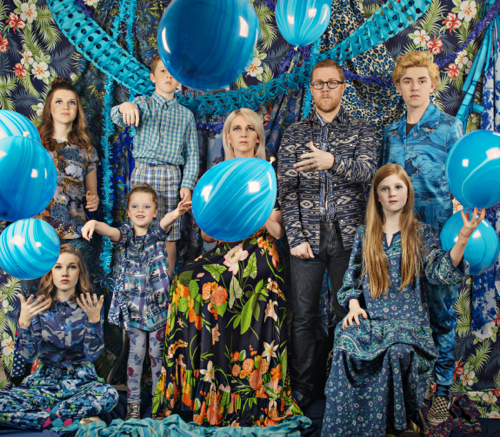 To help make the color decision, I went to a fabric store. I walked the aisles and assessed my pattern options. What was there the most of? Browns? Reds and oranges? The clear winner was blues. There happened to be a lot of blue patterns in stock. So I focused on blue. I bought yardage in a dozen or so patterns to use as backdrops, and then it was back to clothes shopping.

Once I had decided on blues, half of what I’d gathered so far clothes-wise no longer worked, but happily, I still had some good core pieces. And from there, I filled in the blanks. I found more items at the thrift shop. I found June’s dress and leggings at Old Navy. Maude wore her running pants and we found a shirt at H&M. 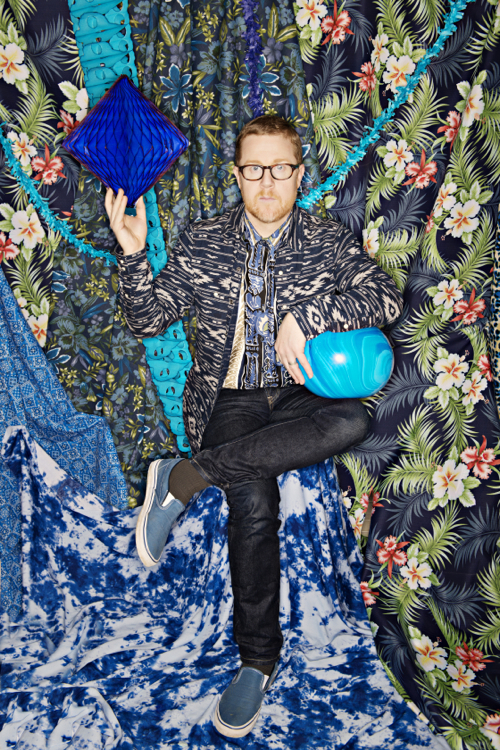 There were lots of surprises with the outfits both during the prep and during the shoot. Sometimes we’d see something in the store and think it was perfect! And then bring it home and find out it didn’t work well with the other patterns. I remember we were worried about Maude’s outfit, and had several alternative pieces — but hers ended up being amazing on camera. 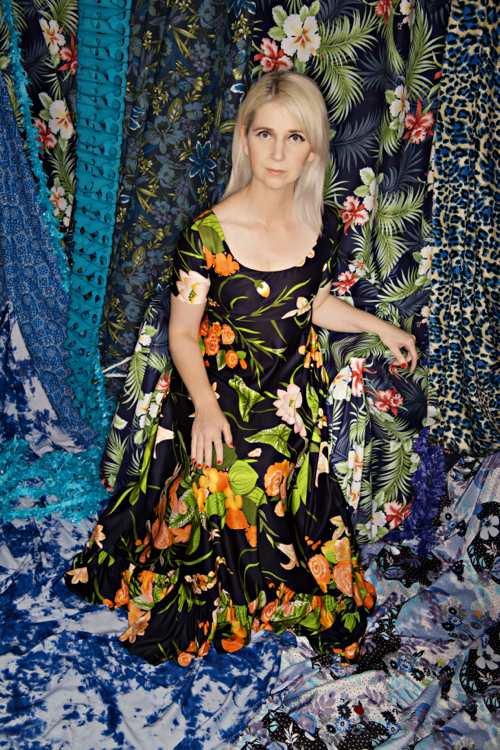 On the other hand, we were super confident about my dress — which was a navy, and didn’t even consider alternatives, but the dress ended looking almost black on camera. Oscar was also tricky. I was generally avoiding plaids and checks — I wanted wilder patterns. But I couldn’t find anything for Oscar and ended up using two pieces that were already in his closet. There was also a question of shoes. Were we wearing them? Were we not? Did they need to be patterned? 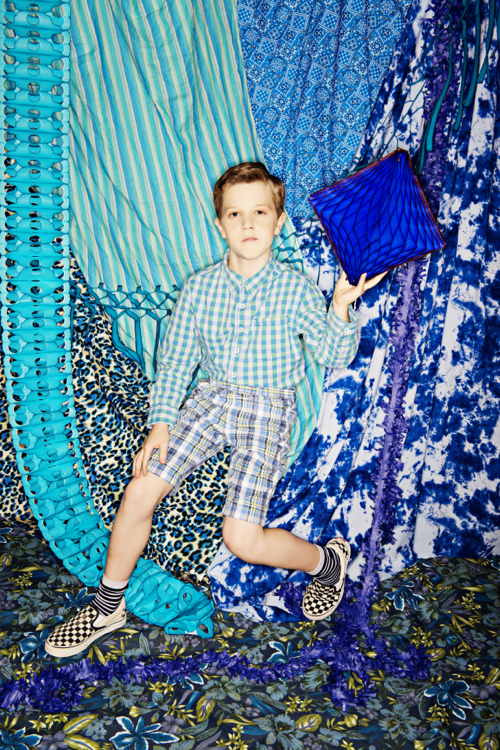 The most challenging items? Patterned pants for Ben and Ralph. I searched and searched and searched every store in town! Finally, I found the pants Ralph is wearing — with sort of an outer space print — at Zumiez. But nothing surfaced for Ben and we were running out of time. We considered putting bleach spots on an old pair of jeans, we looked at a pair of plaid pj pants, but ultimately, simply ran out of time. Honestly, we were still figuring out final decisions on clothes right up until Wendy arrived with her camera! 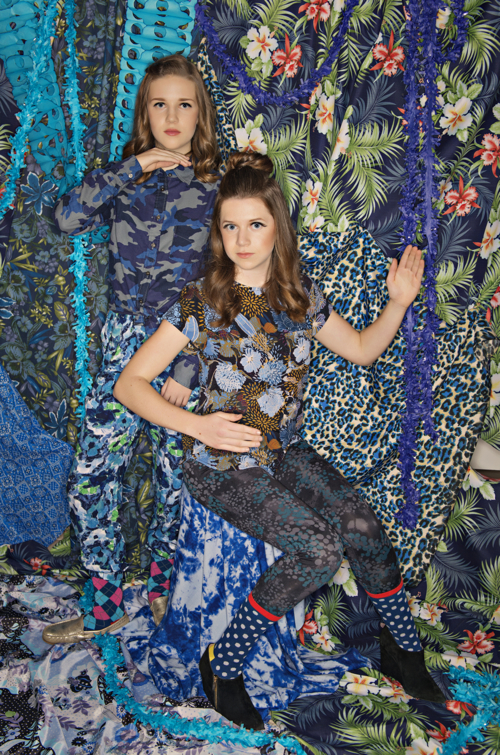 For location, Wendy and I discussed possibly renting a studio space, but decided we could do it at our house, which I was very happy about. It’s so much easier to make changes on the fly when I have resources and props close at hand. Wendy brought a backdrop bar and we used straight pins to attach the fabric and rearrange it. Wendy came prepared with tons of equipment — including this amazing donut flash — because even though this was taking place at our house, she wanted to light it up like a studio. Wendy also brought a helper to assist, who was hugely helpful throughout the shoot. 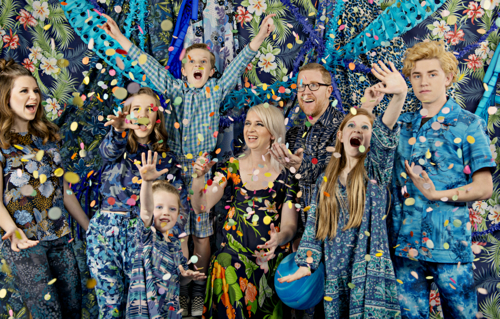 For props, I went straight to my sister’s Oh Happy Day Party Shop. We used gorgeous marble balloons and colorful jumbo confetti. We used honeycomb diamonds, intricate garlands and festooning in two colors. Basically I filled a box with everything blue I could find. : ) A note on the jumbo confetti: one pack goes a long way! It looks like not much in the package, but you put it in a container with a lid — like a shoebox or rubbermaid bowl — and then you shake it like crazy. The pieces separate and suddenly you have so. much. confetti. 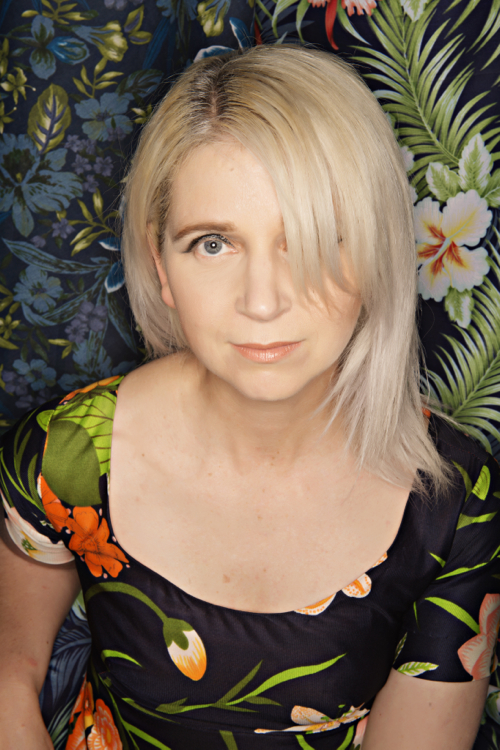 For hair and makeup, at first I didn’t make a plan. I figured we’d just do it ourselves — which is what we’ve done for every other family photo shoot. But when I studied the inspiration photos, I realized I wanted something really stylized for our hair and makeup — something beyond my simply grooming skills. So I went to Bounce, which is my favorite local blowdry bar. The owner arranged for two women to help us — one to do hair and one to do makeup. They came to the house at about the same time as Wendy. As she set up her equipment, everyone in the family cycled through hair and makeup. I think they did a fantastic job! 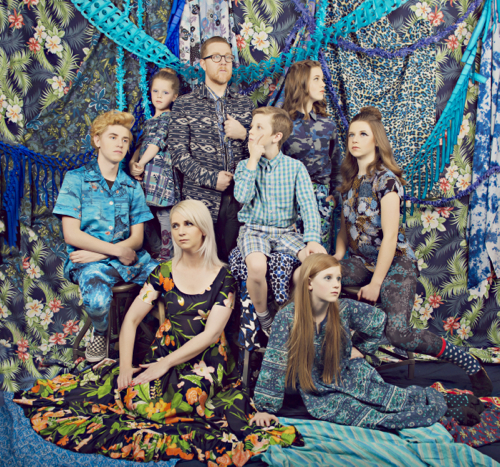 The shoot itself — once the camera started flashing — took about two hours. With setup and cleanup it was more like four hours. We did each child solo, then family shots, then Olive & Maude asked for one together so we did that too. Wendy was amazing! She would help each person find a pose, and she would both art direct and take the photos. She would keep things moving when we hit a pause. She would show us the photos on her camera screen to help give us a picture of what we were going for.

It was a really, really, really fun shoot. The energy was wonderful! The kids were enthusiastic and happy. Everyone stayed open to whatever ideas were thrown out. It was this big reminder to me that people want to work on creative projects. It’s exciting to try something new! It feels good when you push creative boundaries!

Okay. That was a long post with lots of photos. I’d love to hear your thoughts! Does this shoot appeal to you or do you find the whole concept odd? Do you have a favorite among the photos? Have you ever hired hair and makeup for a family photo (this was a first for us!)? Do you enjoy putting together family photo shoots or do you dread it? Do you like to plan outfits or props? Or do you prefer keeping it as simple as possible? Would your kids get a kick out of having photos like this of themselves? Chime in!

P.S. — Remember when I was blonde last year?

P.P.S. — We tried several times to get a confetti one where we all had a straight face and finally realized we couldn’t do it. Turns out confetti makes you smile!! 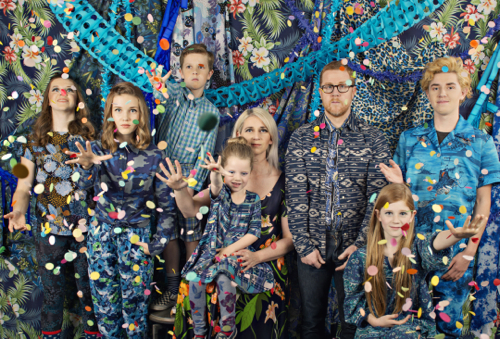