Do You Paint Your Nails? 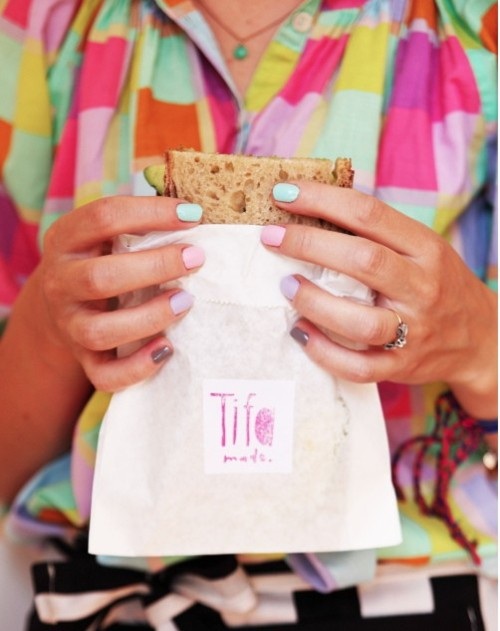 By Gabrielle. Adorable manicure found on The Glitter Guide.

So many heavy topics lately! I don’t really mind — I like a good, serious conversation. But today I woke up needing something a little lighter. So how’s this for light: Have you ever taken your kids for mani-pedis?

On Friday, I took Betty and June for their first professional manicure and pedicure. They’ve both had their nails painted by their older sisters many times over the years, but they’ve never been to a nail salon. We went on Friday when June was finished with her last day of school. June has been asking to have her nails painted for months, but her current school doesn’t allow nail polish, so I promised her that we could get a mani-pedi when summer vacation arrived.

It was really adorable. Both Betty and June took a loooong time deciding on a color. I don’t blame them, it feels like a very important decision once you’re there. Betty chose royal blue for her fingers and a slightly lighter blue for her toes. June chose glittery purple for her fingers and glittery orange for her toes — she had a particular dress in mind, which she was planning to wear to a party that evening, and she wanted to match the nail polish colors to the dress. : )

Every time a new step in the process would happen, they would look to me in wonder, like is this really happening? You could practically see the exclamation points on their faces:  The water has lights that change color! There is tissue between my toes! There are funny sandals to wear while your nails dry!

I told them they could say no thank you if there was a part they didn’t like — if their foot felt too ticklish when the heels were scrubbed, or if they weren’t in the mood for a hand massage. But they seemed to enjoy every single second. In fact, as soon as we’d finished and were back in the car, June said, “I want to go again!”

When Maude and Olive got back from Girls Camp on Saturday, I asked them how many times I’d taken them for mani-pedis and they both said only once! Apparently, I have been really stingy with the nail appointments. : )

And it made me wonder: Not counting a basic trim with nail clippers, how often do you do mani-pedis with your kids? Do you do them at home? Or go to a nail salon? And how about for your own nails? Do you paint them or keep them natural? Do you do it yourself or hire it out? And is there anyone reading that has never had painted nails?

I’ve had natural nails most of my adult life, because my hands are so busy that I can’t keep my painted nails from chipping in less than 24 hours. Ugh! But when we got home from France I tried shellac/gel nails (the kind you put under the blue light) and on me, they remain chip-free for a week. Sometimes even a bit longer! The downside is both gel and shellac totally weaken my nails. I’ve also tried a polish called Vinylux that is my current favorite. It doesn’t weaken my nails, but it lasts much longer for me than regular polish. I can usually go 4 or 5 days without a chip. With the new-to-me polish discoveries, these days, my hands almost always have polish. Quite a shift for me!

P.S. — Don’t waste your old nail polish. Use it to marble everything in sight!