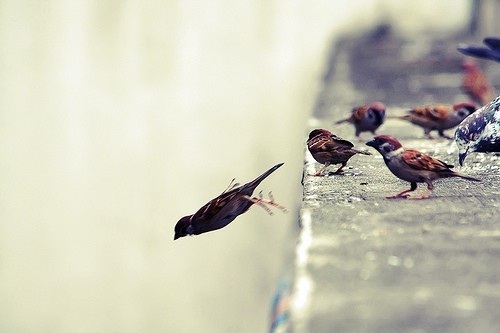 If you close your eyes and remind yourself of the biggest chance you ever took, where do your thoughts send you? Somewhere lovely, I hope. Every single story I’ve heard reinforces my belief that the greatest leaps bring the grandest adventures. It just takes that first step. The five daring bloggers I gathered to answer my latest question prove this beautifully. Here’s how they finished this week’s question: The biggest chance I ever took was…

Shannon of A Mom’s Year:
…adopting a child after having three biological children. I wouldn’t admit it out loud, but I worried that I wouldn’t feel the same way about Lily Aili that I did the children I’d given birth to. Not only that, but I had nursed my first three and it had been an incredible bonding experience. How in the world would I bond with a 13-month old?

But then something amazing happened.

I settled into a chair with Lily in one arm and her bottle in the other. There we were, complete strangers — now mother and daughter — faces just inches apart. As I helped her position the bottle, our eyes met and held. I gazed into those brown eyes and saw Lily’s guard begin to break down, ever so slowly. I don’t know what she saw in my blue eyes, but I like to think it might have been a certain fierce protectiveness. You’re mine now and I will take care of you.

As the hours and days and weeks went by, we experienced a growing familiarity, then tenderness, then love. Now Lily is a happy, thriving, glorious seven year old. I watch her with her siblings and laugh to think that I ever worried. It’s so obvious that we belong together.

And one of the loveliest blessings from this chance I took is that when someone whispers that she’s afraid she won’t love her adopted child enough, I can say with absolute certainty that yes, you will love this child just as much as if you’d given birth to her. You belong together.

Rosa of FlutterFlutter:
…trying to have it all.

After high school, I was trying to decide whether or not to move to the States to attend a well-known art center in Atlanta, or to stay in Vancouver and attend a local art school; a decision made harder by the blossoming relationship I was in with a pretty great guy. I worried that by staying put I would be giving up the chance to be successful as a graphic designer, but also worried that by leaving I would be giving up any chance we had of sustaining the relationship.

I took a chance, choosing love and a local school, and I haven’t looked back. Art school introduced me to amazing friends, followed by both great and not-so-great design jobs where I learned from such talented people. And the relationship turned into a fabulous marriage: 13 years, two kids, and counting! Now, as a full-time mom and part-time graphic designer, Etsy seller, and blogger, I realize that having it all doesn’t mean that I can have everything. But I’ve also discovered that everything I do have is all that I need.

Sandra of Raincoast Cottage:
… leaving a successful career for a new one in a completely unrelated field.

Once upon a time there was a girl who loved people and creativity and beautiful things. But when it came time to go to college and have a career, she took the responsible way out; she became a business consultant and made lots of money. But do you know what? She didn’t live happily ever after. At least, not at first.

That girl was me.

I was good at what I did. I was successful. I gave speeches. I taught courses. I wrote articles for magazines. I worked overseas in southern Africa. But when I was alone and quiet, I kept hearing a little voice that asked, “Is this the life you want? A life that revolves around your paid work with very little time for your passions and interests and fun?”

One day I took a big chance – the biggest chance I ever took, in fact! – and I decided to change careers. I left the consulting world, and became and marriage and family therapist. Of course it didn’t happen overnight. I first decided to change. Then I researched graduate schools. Then I applied. Then I was accepted. Then I resigned from my job and did some contract work while in school. And finally, two-and-a-half years later I had a graduate degree in counseling psychology.

What did I learn? I learned how hard it is to change when the people from your old world don’t quite understand why you are moving to a new world. I learned that it’s hard to be a beginner again. It’s hard to be really, really bad at something, especially when you have been really, really good. Humbling stuff! I learned that you must follow your dreams. You need to find your tribe…your community that shares your values.

Make no mistake: it wasn’t easy, and there were many bumps along the way. But I learned that I’ll always regret what I don’t do much more than what I do, no matter how it turns out.

Christa of I Know How Is Babby Formed:
… quitting a full-time job that was local to write remotely for a company located across the country. In some ways, it was an easy choice because I’d already put in a few years of light freelance work for that far-away company. In other ways, it felt like an immense risk; I’d be a contract worker with no benefits and no guarantees.

But it was a good thing ultimately, because I needed that flexibility desperately when my daughter was born six weeks early.

Now, a few years later, I’m back in that exact same boat. It feels like an odd replay of my mid-twenties! I’m working locally again with aspirations of starting my own business and attracting enough clients via word of mouth and my editing and writing website to be able to work from home and to make my own hours again. It’s no secret to my blog readers that we’re trying to conceive again, and I want to be able to give my future children the same sweet mama-at-home time. Hopefully sometime soon, I’ll be taking the same big chance again on my own terms.

Lisa of Little Monster:
… trying to have a baby. This decision was huge for me. I will never forget the sound the birth control pill container made hitting the bottom of the trash can. It sounded like a hundred tons of bricks hitting hard concrete on top of a microphone. I knew I wanted to be a mom, but I wasn’t sure if I was prepared enough, strong enough, happy enough, accomplished enough, ME enough to take the leap. You name it, and I worried about it. It had taken me years to get comfortable in my own skin, and now I was thinking about doing that for my own child? Surreal!

But really, the reason for my hesitance was garden variety fear with a big dose of insecurity. I did overcome these feelings long enough to conceive. I mustered up the courage to have a very stern conversation with the voices in my head. I told them to take a hike. There was no need for them where I was heading. It took a couple of these heart-to-heart chats and a lot of coaxing, but thankfully it worked.

I think I was right to be scared, up to a point. Bringing a person into the world is the most important thing you can do, and with that comes responsibility. But having Rowan is the best thing I have ever done. I have never been more inspired, tired, happy, sad, strong, weak, loving, and loved in my entire life.

Thank you, ladies, for sharing your stories. I’m sure you’ve inspired more than a few of us to take that first step. Your turn, Friends! Will you tell me of your most daring leap and answer this week’s question, please?  The biggest chance I ever took was…

I know you’ll inspire me leaps and bounds!

Little bird found here, but I wish I knew the photographer responsible for capturing such beauty.