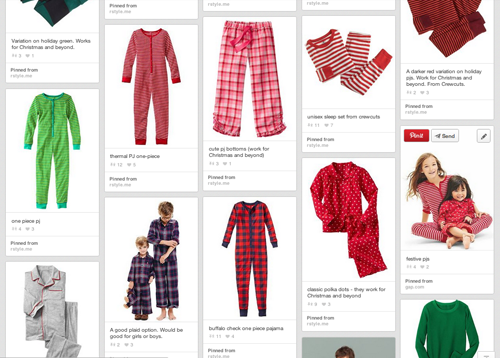 Do you have a Christmas Eve pajama tradition? I know it’s a common one. We’ve given new pajamas on Christmas Eve since Ralph was a little tiny guy, so it’s a tradition our kids have come to expect — and one that brings a lot of joy. But I’m so picky about them!

I like the pajamas to feel festive for Christmas, but not be holiday-themed — because I want them to make as much sense in May as they do in December. So I steer clear of anything with snowflakes, ornaments, or other holiday symbols. A red stripe is great. Or a simple green pj works, too. But I don’t want them to be both red and green in one. I totally get it’s a dumb pet peeve, but seeing my kids in santa-themed pjs in August bugs me, so I go out of my way to make sure our holiday pajamas work year round.

And then there’s matching versus coordinated. I usually start with matching pjs as the goal, but that means I need to find a line that comes in both June’s size and Ralph’s size — a line that’s appropriate for a 16 year old boy, and that still appeals to my 3 year old who is in a super feminine phase. So sometimes the matching goal goes out the window. Last year we had a wonderful find from a French store called Cyrillus. A not too heavy cotton broadcloth in navy plaid, with a touch of red and green, that didn’t read too “holiday” (similar to these). We found them in the boys department (which offers sizes from 2 to 16 — perfect!). I knew June would wrinkle her nose at the un-pink, un-lacy pajamas, so I added a red grosgrain bow to the chest pocket on the sets for my girls. Everyone was happy. And they’ve worn those pjs all year long!

Speaking of long-johns, when all of my kids were younger, we preferred a knit, long underwear version, but now that some are older, they no longer want to hang out in clingy pajamas, so we look for something with more traditional button up styling.

I still haven’t decided on this year’s pjs. I considered having Ben Blair pick up these while he was in France. The little dots are actually stars. So cute! And they could definitely work for both girls and boys — especially if I added bows again. But then decided I want to find something here. So I’m still hunting. I’ve pinned a bunch of options on my Gifts for Kids board that I’m considering. We’ll see what we end up with.

On certain years, we’ve considered skipping the tradition, but never too seriously. We like it too much! When the kids are antsy to open something on Christmas Eve, the pajamas are like a peace offering. They give the pleasure of getting to unwrap a gift, and they’re put to use immediately. Plus, new pajamas (especially festive looking ones!) make for extra-charming photos on Christmas morning. : )

How about you? Are you as picky as I am? What do you look for in a Christmas pajama?