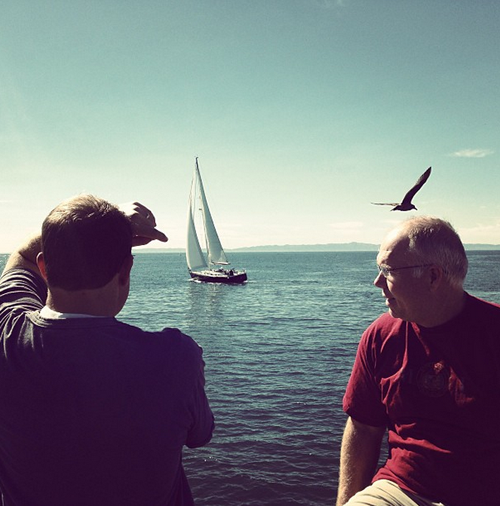 By Gabrielle. Images by Ben Blair.

Last month, Ben Blair took a trip to Santa Barbara with his father, and his three older brothers. It sounds like a simple thing when I type that, but it was actually a big deal. My father-in-law, Robert Blair, is not a picture of health. He’s in his 80’s, and he has diabetes. He has been on dialysis for 8 years. Ben’s father is a linguist by profession, and the majority of his life was spent traveling the world in order to learn languages, but his health has kept him fairly home bound for years now. So this trip was pretty much epic.

In August, Ben and his siblings gathered at his parents’ home to celebrate their wedding anniversary. At one point, Ben’s father paused the anniversary party to say he had regrets that he wasn’t there enough as a Dad. And it’s true. Like many homes of that era (and many today), a sort-of absentee father was a fact, and Ben’s mother ran the home and interacted most with the kids.

Wanting to fit in some of the missed bonding time with their father, Ben’s brothers came up with this bold plan to rent an RV (so that his father could lie down and sleep on the road), and drive to Santa Barbara — their father’s childhood home town. It was a last-minute road trip, and for the few days leading up to it, there was this feeling of: Is this really going to happen? But it did happen! And it completely transformed Ben’s perspective on his Dad, and what his Dad’s legacy meant for him. 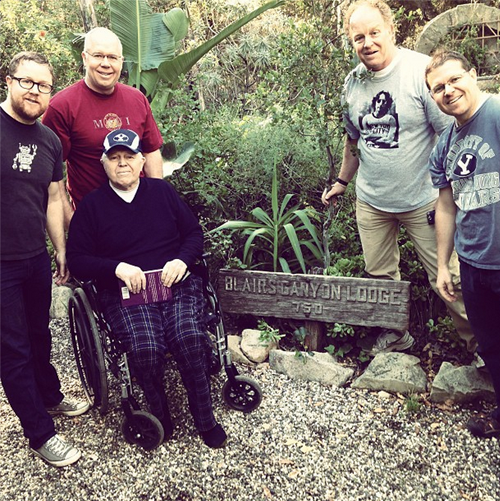 Ben had never visited Santa Barbara (that he could remember — we hear there was a visit when he was a baby) and he found the city to be picture perfect —ocean, mountains, history, not too sprawling, not too fast-paced, not too crowded, ideal weather, just a gem of a town. (Fun fact: In our search for a home in the U.S. we looked into Santa Barbara because of this family connection, but were out-priced.)

But even better than seeing Santa Barbara the city, was getting to see the home Ben’s father grew up in — including details like a bed that his grandfather made by hand and that his father slept in as a child. The Blairs no longer own the home, but they knocked on the door and happily, the homeowners didn’t mind letting them have a tour. Ben had heard about the house, that it was beautiful home on a forested piece of property, near The Mission in Santa Barbara. But seeing it in person, and hearing stories from locals and nearby cousins about Blair Canyon Lodge (the sign is still there!) shifted the whole way he thought about the Blair side of the family, and how he views himself and his heritage and family narrative.

Apparently, the Blair Canyon Lodge was a really social place. A gathering place. A sometimes bed and breakfast. The site of frequent community parties. The Lodge, Robert Blair’s childhood home, was filled with music — Robert played the trombone. His mother played piano, his father and sister were both singers. In fact, as an adult, his sister was in the famed Tabernacle Choir. (Another fun fact: our Ralph also plays the trombone, but I didn’t learn of the trombone connection until recently.)

Ben’s Dad has outlived his immediate family by 40 years. Robert Blair’s father died when he was a teenager. His mother and only sibling died when he was middle-aged — right around the time Ben was born. Of course, this means Ben has never known his Dad’s side of the family. They had all passed away. So Ben grew up very connected to his mother’s family (the Grobergs), but much less connected to his father’s side. And this trip was a window into a completely different heritage that he had been mostly unaware of.

I don’t think Ben had considered his father’s side of the family as being that influential in his own life. But seeing the home, and the bed, and the town in person, and hearing his Dad tell stories of throwing mudballs, and raising chickens, and having parties seemed to open his eyes to how influential his Blair genes actually are. There’s this idea we’ve had of having a home that functions partly as a social center for our community — something we both desire for our house. And we’ve thought of it as an idea that’s independent of how we grew up. But learning about the Blair’s Canyon Lodge, made us realize this idea is actually part of continuing family narrative. So fascinating to discover! And really, after the trip, I could see that Ben Blair views himself a bit differently now. 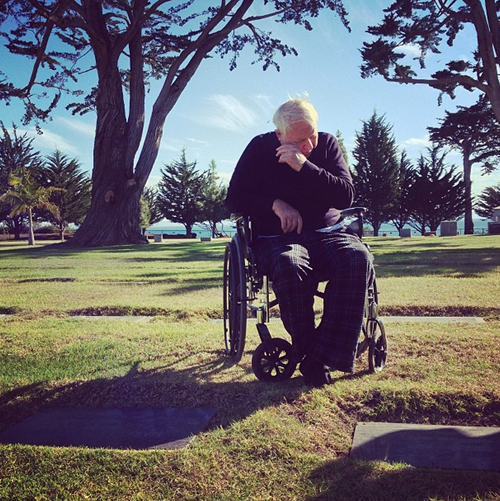 Ben’s father has been without his parents and his sibling for half his life. And certainly, one of the most moving parts of the trip for Ben, was seeing his father’s emotions at visiting the graves of his parents.

For Ben’s Dad, his best days are behind him. Frankly, not knowing how long I’ll live, the same may be true of me right now. And if it isn’t true today, the scale will inevitably be tipped one day so that my best days are behind me. It’s a straightforward statement, but jarring still.

The Santa Barbara trip left us thinking about how our family heritage shapes us, about the places that are dear to us, about our relationships with our parents and our children and our siblings. I also can’t help but wonder: Ben’s father hadn’t visited his home town in nearly 4o years. Will there be a time when the same is true for me? And have you ever learned something about your family history that changed the way you view yourself? I’d love to hear.