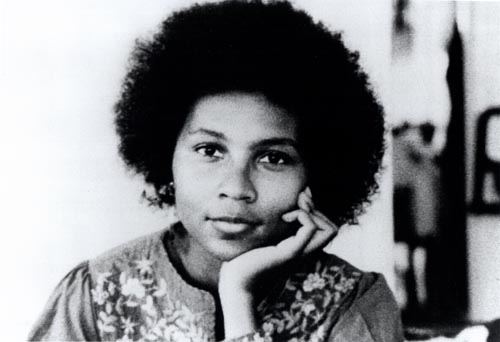 By Gabrielle. Image of bell hooks — if you know the photographer, please share.

February is quickly coming to a close, but before it’s officially over, I wanted to feature some of the best articles and bits of history related to Black History Month and racism that I’ve read this month. I’ve basically relied on Kelly Wickham as my source — she’s a genius and she’s done a fantastic job highlighting essays and blog posts over the past few weeks. I highly recommend following her.

I suppose racism is always a topic on the minds of Americans, but it has especially been in my brain since Ralph and Maude started attending our public high school here in Oakland — a school with only a small percentage of white students, which is new experience for them. I grill my kids with questions about it: How often does race come up? How often does racial stereotyping happen? What kind of language do teenagers here use to discuss race? I get a little obsessed. It’s just that I want to be actively engaged in raising kids who will help eradicate racism in our country — I assume most parents feel the same way. But sometimes it’s hard to know where to start, and how to get it right.

Here are three of the things I made note of this month:

– It’s Not About You, and other adventures in privilege.

“Whiteness is the reason that when I see a Muslim character on television, they’re more likely to be a terrorist than a love interest. Whiteness is incredibly problematic and we can and should question it and the ways in which it affects and harms people of colour. Because that’s what it’s about, see – not making white people feel bad, not white guilt or white-shaming or reverse racism. It’s about tearing off the shackles that bind us.”

– bell hooks. An author I haven’t read, but now want to. I plan to start with All About Love.

– The Blacked Out History tumblr. Really well done snippets of history. I learned about Maroon Communities which I had never heard of, and the 10 demands of the Black Panthers.

UPDATE: A reader named April commented below and recommended two more blog posts that I found really compelling. I’m adding them here so you won’t miss them:

– How White People Will Ignore Obama’s Speech on Zimmerman.

– There have also been 3 mentions of the book, NurtureShock in the comments — specifically the third chapter titled “Why White Parents Don’t Talk About Race”.

Tell me, Friends, how do you teach your children about race and racism? Is it something you discuss as a family? Any related links you’ve come across this month? I’d love to hear.