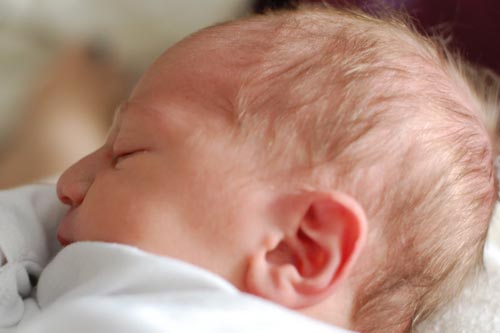 “And from your lips she drew the Hallelujah” —Leonard Cohen, Hallelujah

G was my third baby, and my third winter baby. My oldest, a January girl, was born without a drop of weather interference. Our second child, a December girl, was born on a bright, sunny day. And then there was G, who was due Friday, February 5th, 2010. We live in the suburbs of Washington, DC, and February 5th was the day the blizzards began. Based on my doctor’s opinion and exam, I’d been expecting to go into labor ‘any minute now’ since February 1st. We were nervous.

Where we live we typically see 14″ of snow per year and we were expecting more than double that amount over the weekend. As the first snows fell and the state of Maryland declared an emergency and shooed everyone off the roads, we made the calculated decision to move in with our friends for the weekend. That way we wouldn’t have to worry about our two daughters having someone to care for them if/when we figured out how to get me through the snow to the hospital. We believed we were making the responsible decision.

We moved in with our friends, transporting the cooked food we had ready for the weekend; the girls, their inflatable mattresses, special pillowcases, favorite books and stuffed animals; provisions for ourselves; and, of course, my hospital bag. Then, as the first foot of snow fell, as Friday turned over to Saturday, as I turned over from full-term to past-due, the power went out.

Saturday was cold, and another foot of snow fell. Sunday was colder. The temperature inside the house dropped as low as 41 degrees and there were 30 inches of snow on the ground. And I ached so much. Two days past due.

By Monday we were very grateful for the power that had been restored and the plows that had made a pass through the neighborhood where we were staying. We could get out if we needed to go anywhere, like maybe to a hospital. I ached so, so much. We could get out, but we couldn’t get home. According to our neighbors, our own street still hadn’t been plowed. Three days past due.

On Tuesday we returned to our own house, in a neighborhood that had never lost power, still a family of four. So tired of snow. So achy and lethargic. Four days past due.

On Wednesday it began to snow again. The meteorologists were talking about additional accumulations of more feet, not inches, of snow. The hospital called to see if I sensed I might be in labor. If I was possibly in labor, even early labor, I was instructed to come in immediately. I regretfully had to say that I wasn’t in labor at all. I was given these instructions: “Don’t go into labor. Feet up, drink lots of water, tell your husband he’s waiting on you tonight. If you do go into labor, DO NOT DRIVE HERE. Call 911. The Maryland National Guard will push a snow plow in front of an ambulance to get you here, if necessary. But don’t go into labor.” The snow climbed higher than my belly button, higher than my baby still inside me. Five days past due. 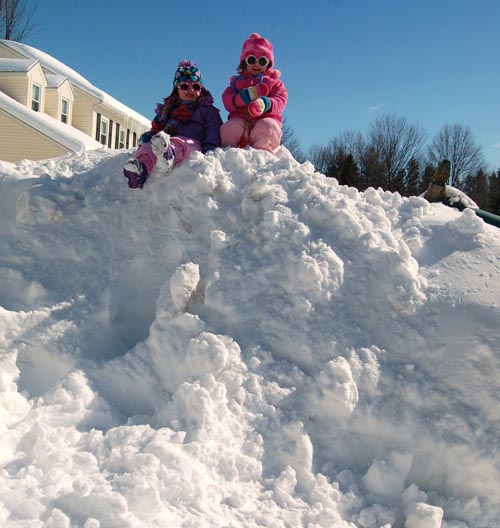 On Thursday the snow was more than 40″ high. We played outside in it with the girls. I felt energized, and feeling so gave me hope. Six days past due.

Friday afternoon I finally felt regular contractions. We had dinner together as a family. We got the girls in their pajamas and then we dropped them off at the same house they’d spent the previous weekend in, and finally we went to the hospital. “Third baby! Regular contractions! A week overdue! You, girl: you’re a keeper!” the intake nurse declared. I really liked that nurse.

We walked into the hospital at about 9:30 on Friday night. I was admitted and examined and declared to be at 3 centimeters. The opening ceremonies of the Vancouver Olympics were playing on every TV screen. K.D. Lang sang Leonard Cohen’s “Hallelujah,” a song I’ve loved since college, as the nurse inserted my IV. The doctor broke my water. I progressed from 3 to 10 centimeters in less than an hour. The surprise final torch bearer appeared and the world cheered for Wayne Gretzky, a man who grew up just miles from my own hometown, a man whose name I’ve heard all my life. I told the nurse I needed to push. The image of the glowing, diode-wearing ice skaters blurred into the white hospital light in the birthing room ceiling and at 2:33am our son was born.

Five hours after we got to the hospital, eight days and two blizzards past his due date: G was born without undue fuss, without complication, like that was when he was meant to be born all along. Silly grownups: we just hadn’t known it.

On February 13, my third winter baby was born. And our family was completed.

From Robin of Not Ever Still.

Note from Design Mom: throughout my 6th pregnancy, I posted advice, memories and stories about pregnancy, childbirth, adoption and growing a family on Wednesdays. My baby has now arrived — here’s her birth story and her newborn photos — but the series has been so popular that I’m continuing it indefinitely. You can find all the stories in this series by clicking here. Have a story you’d like to share? I’d love to read it. You can send it to me at gabrielle@designmom.com.