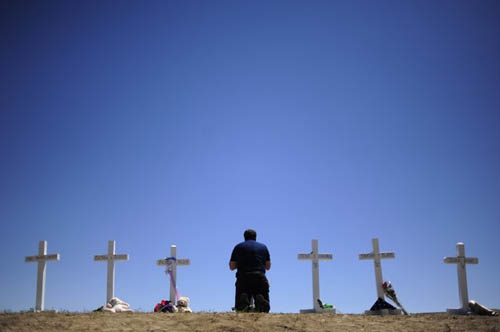 Here we are in Colorado, and the Aurora shootings are never far from our mind. On Sunday, Ralph and Ben Blair attended a vigil in Aurora while I stayed home with the rest of the kids. I was glad they could go and pay their respects, even though I didn’t have the heart to join them.

Yesterday, Christian Bale came to Aurora — and he did it with no fan fare. Quietly visiting the hospital and memorial. No entourage but his wife. The gesture touched my heart and I’m sure it meant something to the families he visited as well.

On Monday, Ben Blair and I decided to catch a late show of the Avengers. We were the only people in the theater. In fact, they turned on the movie just for us. It was a great date night. We made a point of talking and laughing loudly since there was no to bother with our noise. About half way through the movie, a theater employee came in to check the emergency exit while they closed up shop for the night. I immediately started imagining what it would mean if a gunman came through that exit and directed his anger at the two of us. As we drove home after the movie, I realized I will probably imagine the same thing at every movie I go to for the next while — and I’m certain I’m not the only one.

Have the shootings had any impact at your house? Are your kids old enough to be aware of what happened? Do they want to discuss it?