An Interview With an Uber Driver 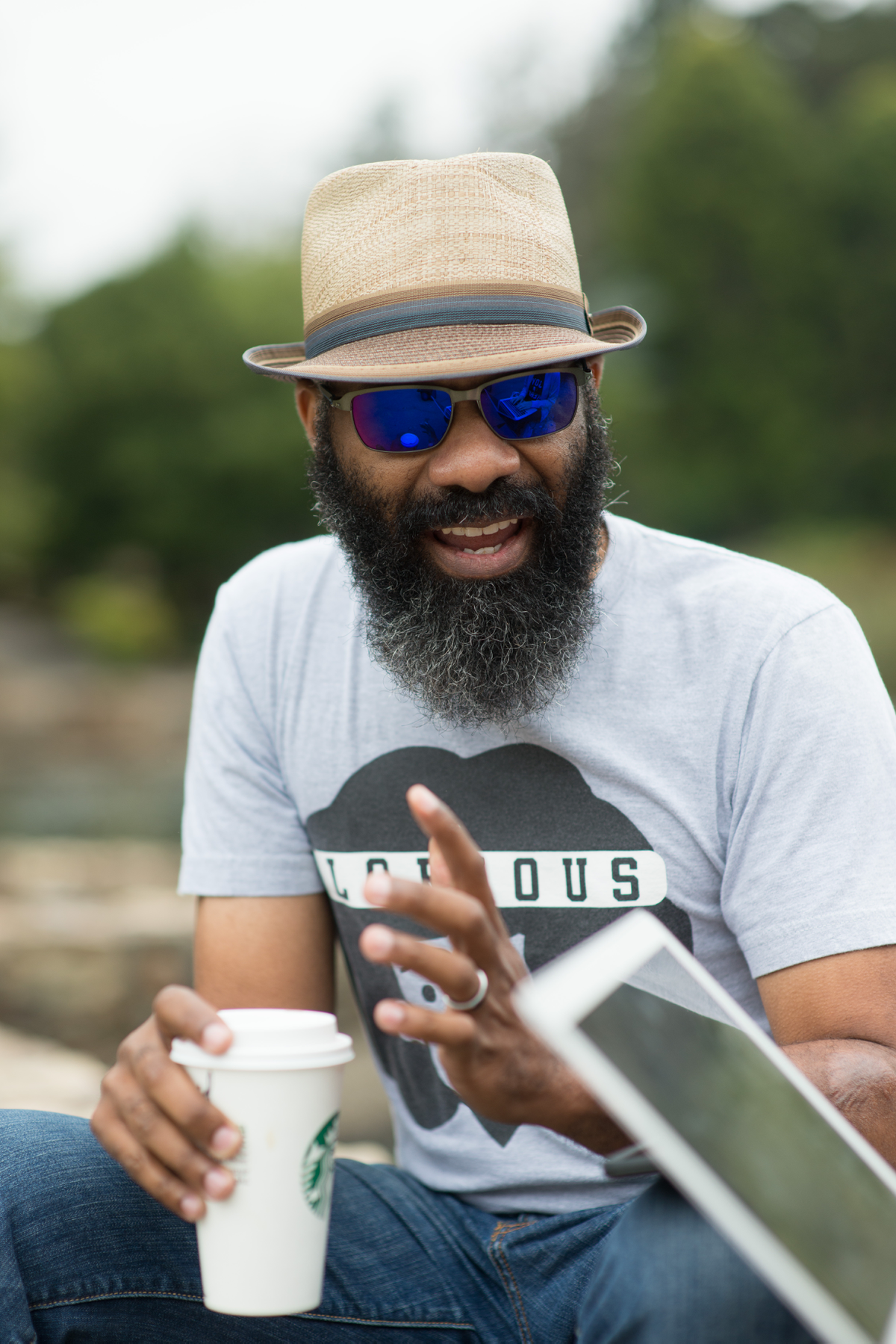 As I mentioned in my last post, I’ve partnered with Uber for a 3-post series. This is post #2, and for this one, I decided to switch gears and interview an Uber driver. I met him at Starbucks, and then we walked to a local park and I asked him all about his experiences driving for Uber. 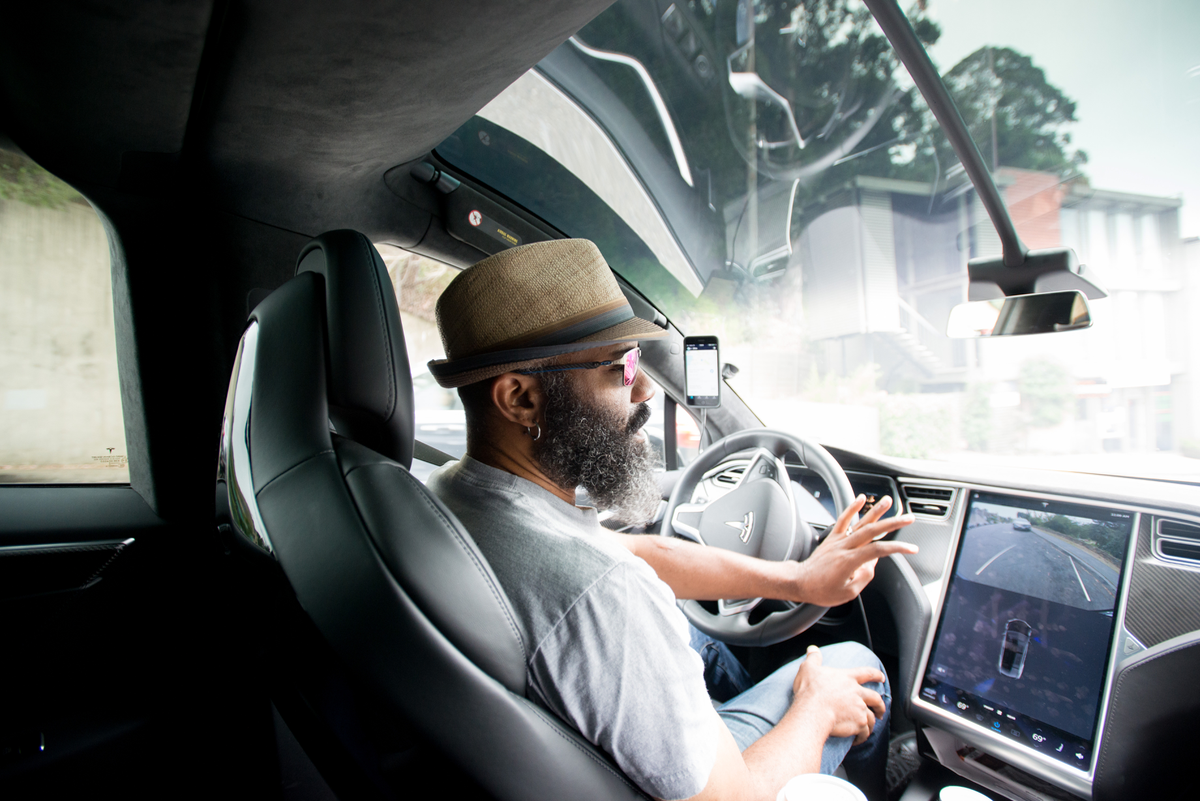 A LOT of news has happened since the last time I posted about Uber. The low-down? As promised, Uber is taking the sexual harassment issue seriously and fired 20 people because of it. And the biggest news of all — the CEO, Travis Kalanick, stepped down.

It was interesting to see the reaction in my social feeds. There was a lot of cheering when he stepped down. The responsibility for the culture of the company — the good and the bad — fell on his shoulders. But while some were celebrating, and others confessed they had been using Uber all along but now felt like they could use it guilt-free, there were also Uber employees in my feed who were mourning the loss.

Of course, it shouldn’t surprise anyone that even with all the negative press, there are still loyal employees. When a company has 15,000 employees (not counting 160,000 U.S. drivers), it’s a given that different people will have different experiences. 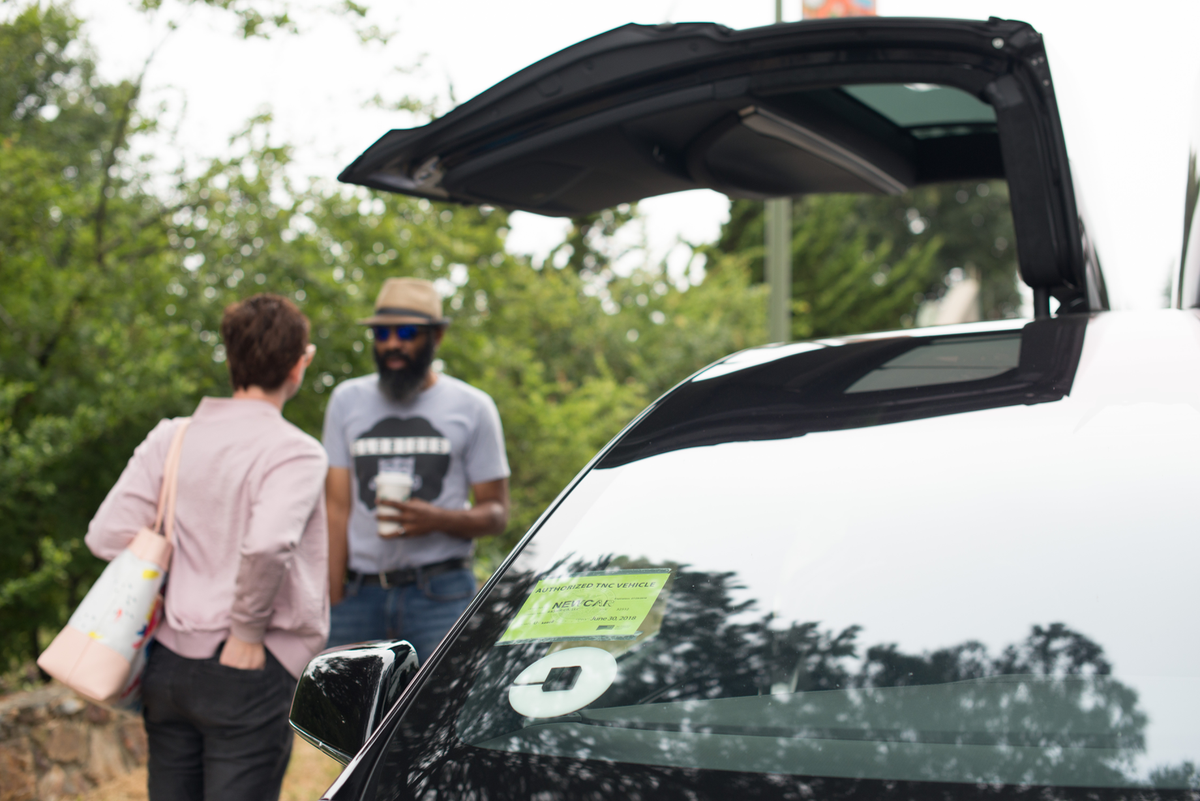 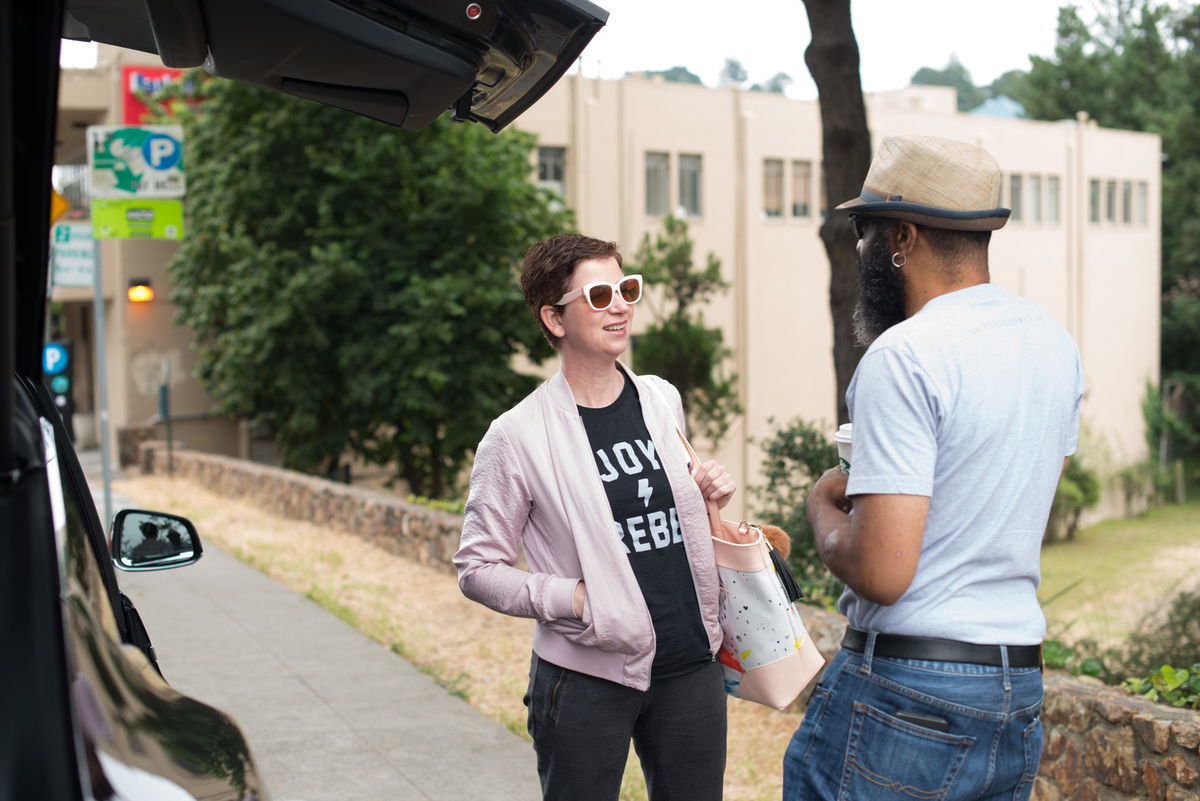 And speaking of having different experiences, I think you’ll really enjoy this interview with an Uber driver. His name is Kindred Sheppard. Here’s what I learned: 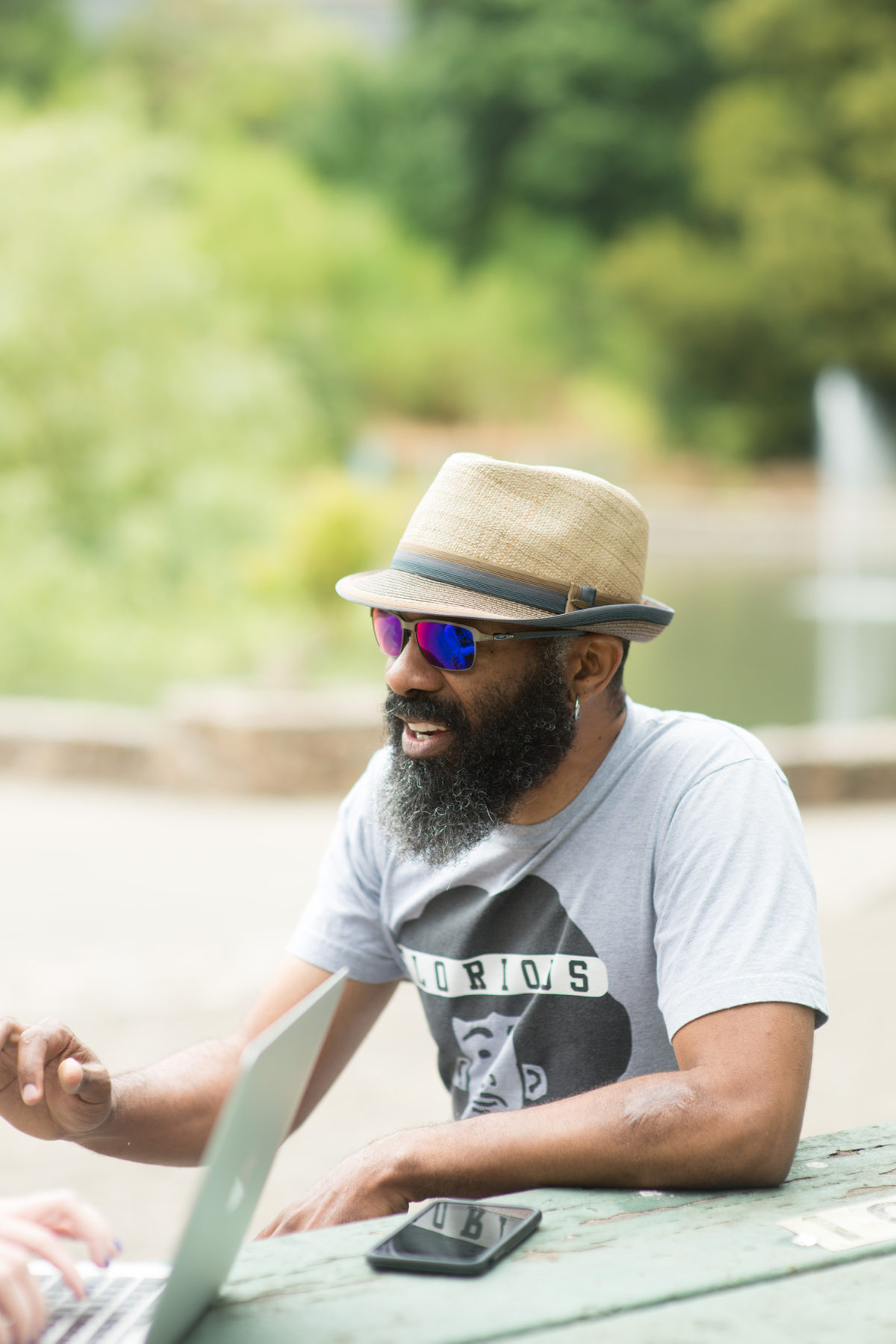 Kindred has been driving with Uber for 3 years. A friend told him about how much he was making with Uber, and Kindred was intrigued. He started doing research on Uber and its competitors, and he ultimately chose to only drive for Uber. Why? “I’m Uber-only. I’m a loyal kind of guy. My logic in choosing was that Uber has a little more savvy clientele, and there’s going to be more opportunity for me there. And by opportunity, I mean, you want to be where the movers and shakers are. You’ll run into venture capitalists driving Uber.”

He didn’t know it when he started, but driving for Uber has been a perfect fit for him. He told me, “I love driving and I love people. It is literally that simple. I feel like I get paid to hang out in San Francisco or Napa or Walnut Creek or Berkeley. I thoroughly enjoy people. I’ve developed the art of the Uber dialogue — I try to make them feel like a rock star for the 10 minutes I’m with them. I like learning about what they do and thinking about the ‘big question’ to ask. The kind of question where the rider will feel heard and get excited to talk; where the rider will say, ‘Thank you so much for asking that.’ It’s also learning how to encourage people. I had a rider who was headed to an interview. She was really nervous and I told her the fact that she booked an interview was already an accomplishment. She gave me the nicest review.” 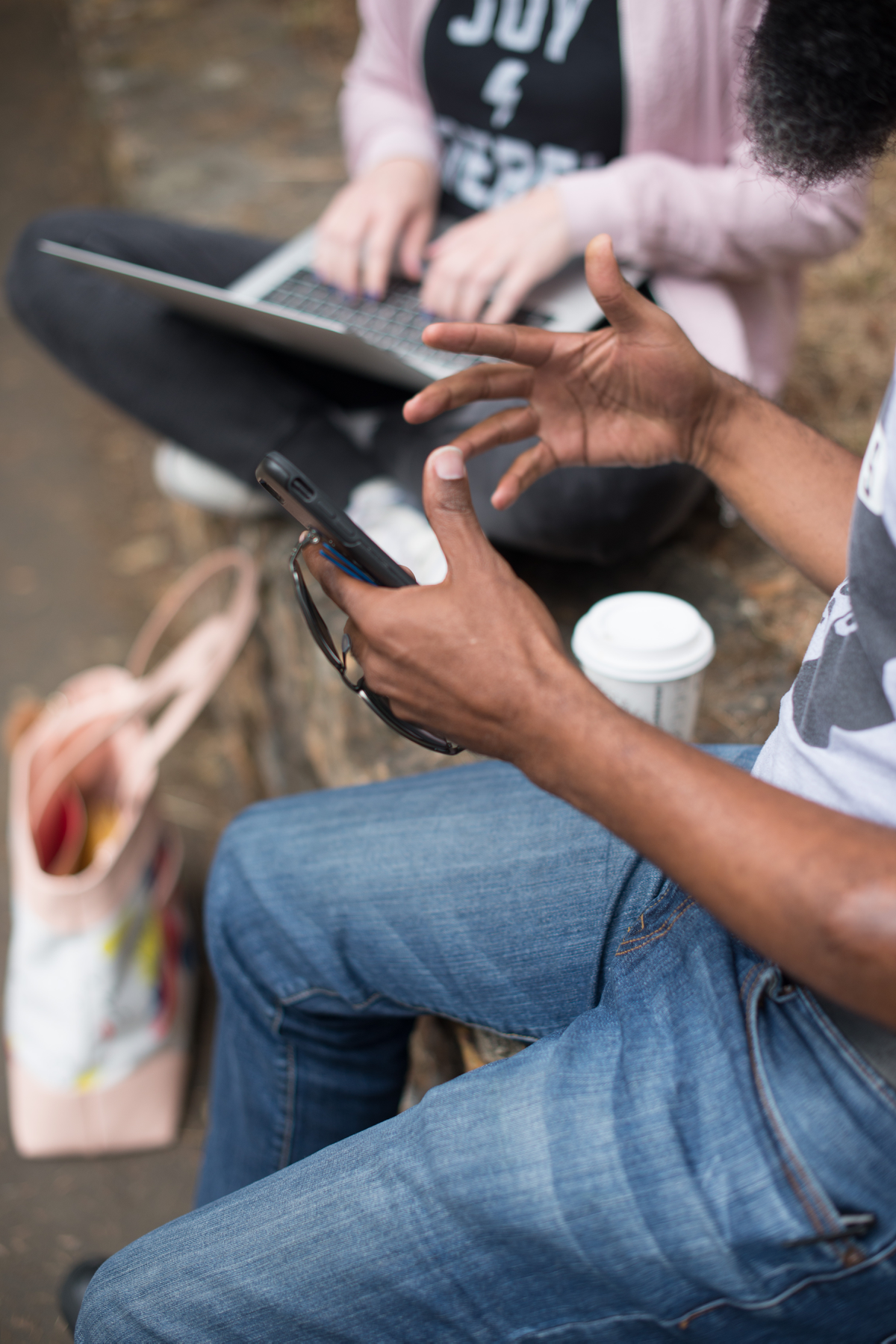 Kindred is a pro, and had lots of good advice for anyone thinking about becoming an Uber driver. Some of my favorite bits:

– “Never compliment a woman. Anything you say is going to sound creepy. ‘You have really nice eyes.’ ‘I really like your hairstyle.’ All creepy.”

– “I’m one who believes: Go online, Stay online. You can’t make money if someone is not in your car. You can’t get someone in your car if you’re offline.” 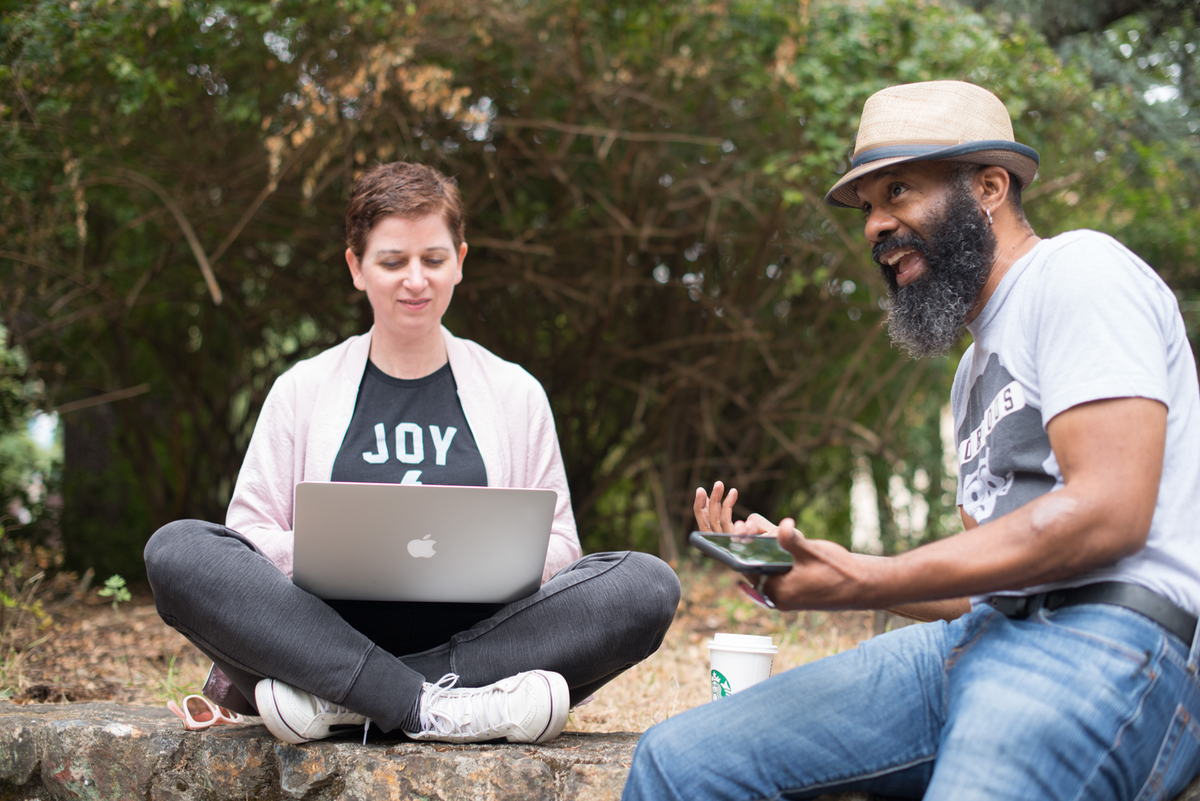 – “Decide if you’re a morning person or an evening person. Those are the big busy times. Be aware, night crowds can be mean. You’ll get a group of guys in your car who have been drinking. They’ll say, ‘Dude, give him 1-star! I don’t like his beard!’ They think it’s real funny. But that’s not funny to a driver. Those ratings affect us. The morning crowd is nicer, much more appreciative. About 30% rate of morning riders give ratings. In the night crowd, about 70% give ratings. Half the total riders don’t rate at all. I have to act like a different person at night. I don’t like that.”

– “There are drivers that hate UberPool. They feel like the rates per rider are so low. They don’t like the constant in and out of the car. And I understand the complaint. I have some issues with UberPool. But I understand that it’s part of Uber. It’s the nature of the beast. Would I like to have back-to-back airport runs, going back and forth all day long? Who wouldn’t? It ups the hourly rate considerably! But that’s not going to happen. You have to understand that even the short distance riders are part of the job.”

– “Play 80s music. Everyone loves it. It’s memorable and nostalgic for older riders, and sounds cool and fresh to younger riders.” 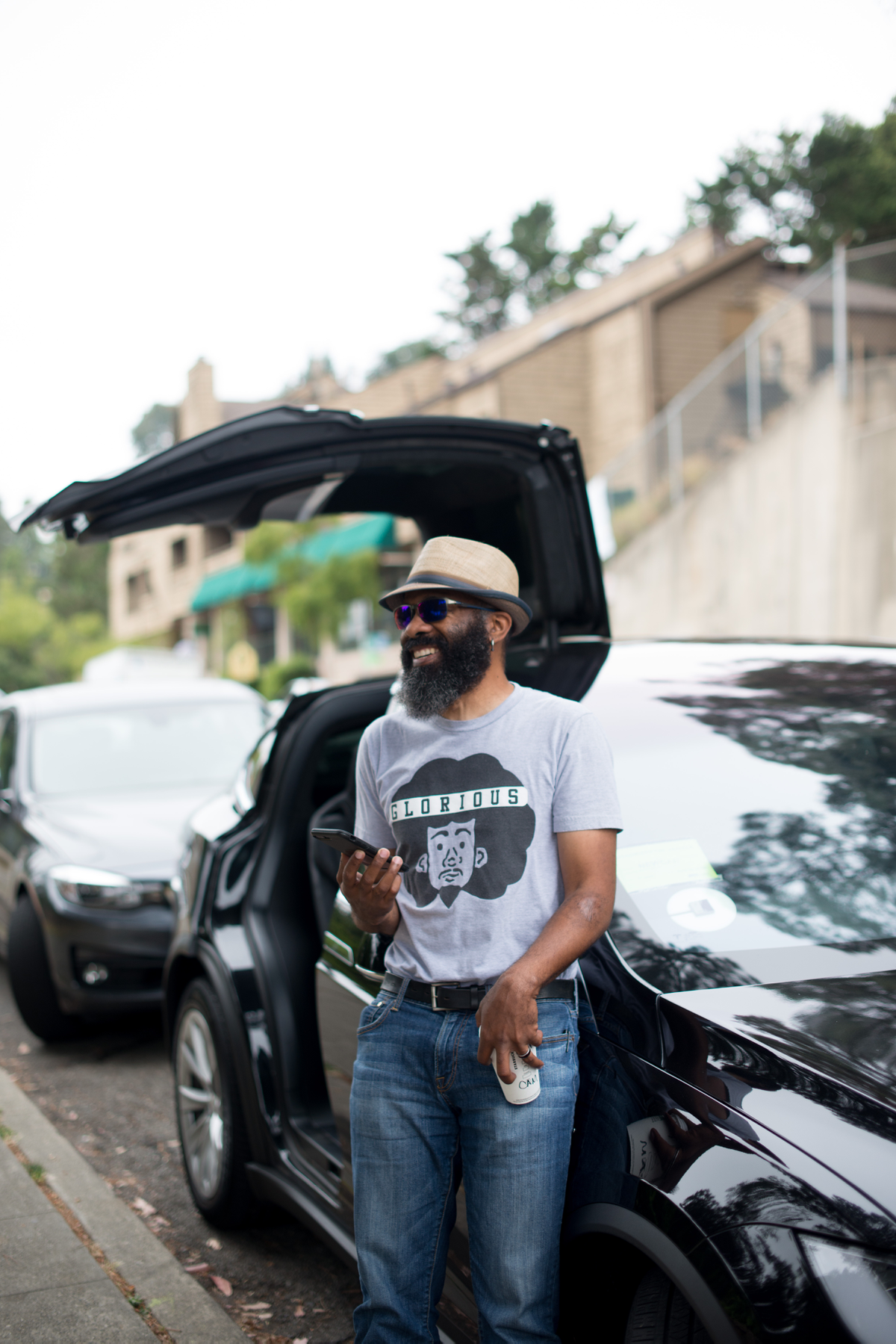 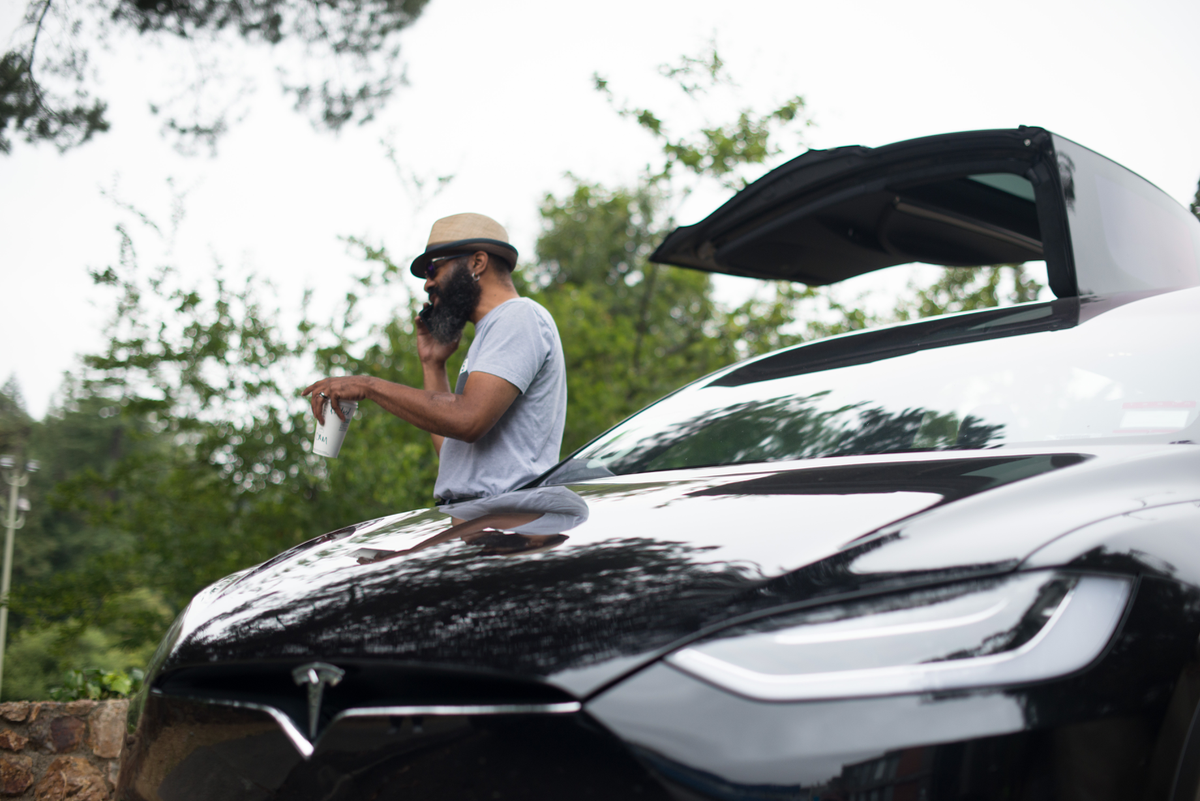 As you can see, he was generous with advice but confessed he didn’t want to give away all his secrets. He compared it to his passion for fishing, “In fishing, I’ll tell you everything — what lures I use, what pole I use. But where I fish? I’ll never tell you.”

Kindred drives a gorgeous, brand-new Tesla. I knew there must be a story there, and there was. Three years ago, when he started driving for Uber, he used a borrowed car. An older car that belonged to his sister. But he did the math and realized he was paying more than $1200 a month on gas. So he did some research and figured out he could get a new, fuel efficient car that would really save him money. He ended up using Uber’s Vehicle Solutions Program. “Vehicle Solutions has been around for a few years and has had a few different iterations. At the time, my credit was bad, but Uber had a program that said, if you don’t have good credit, we have an option. I got a Toyota Prius. I paid it off in 3 years. Now I drive a Tesla. That would never have happened without Uber.” 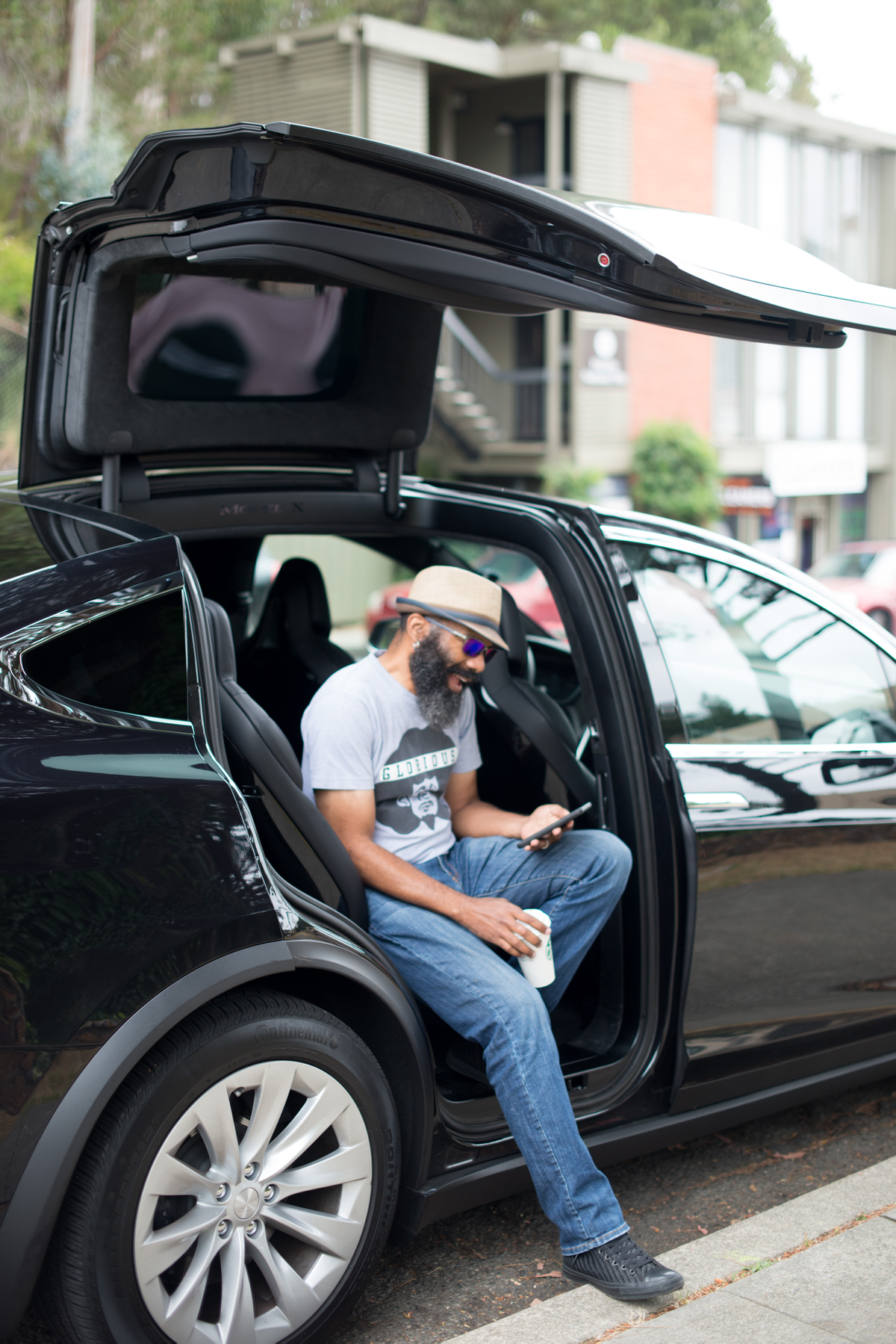 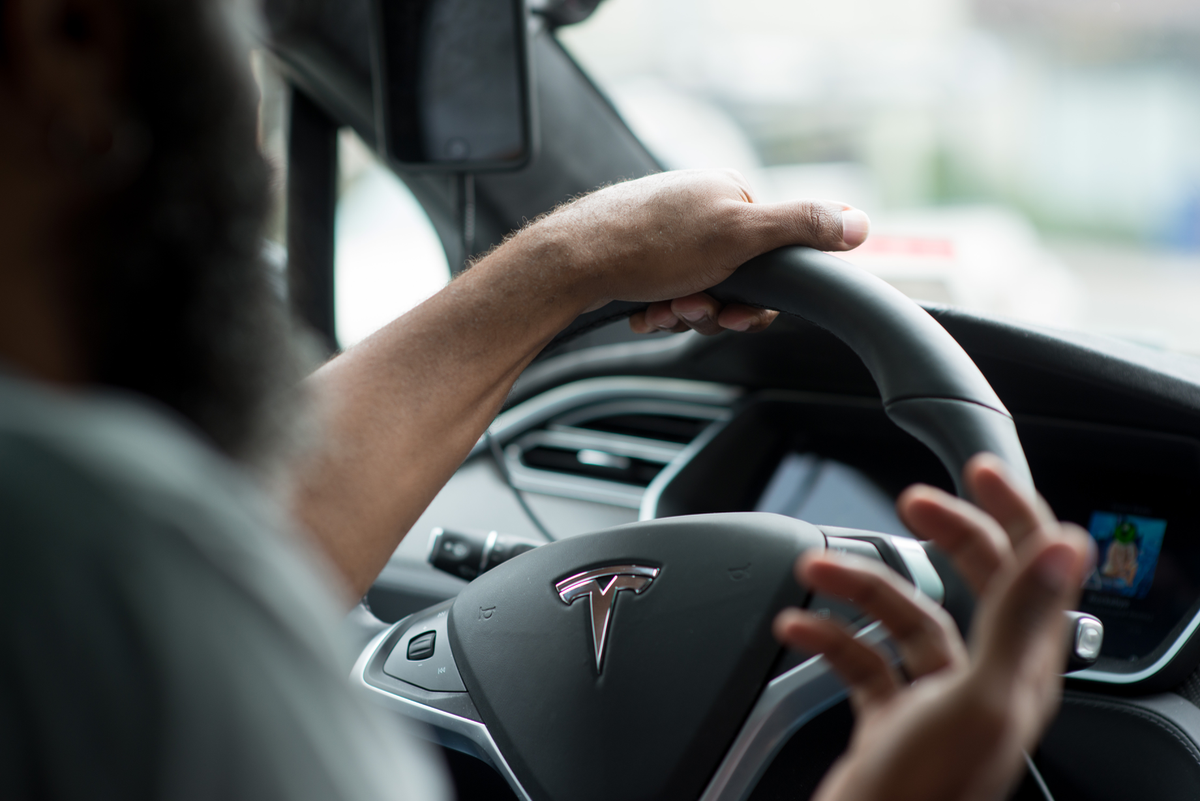 After the interview, I called an Uber to head back home — since I was standing next to Kindred when I requested the Uber, the request went right to him. We continued our chat on the way home (my first time in a Tesla — he demonstrated the auto-parallel parking feature so I could see what it’s like — it’s awesome!). I asked him about Uber in the news and all the recent headlines.

Kindred mentioned that Uber has company-wide meetings focused on the drivers that he always takes part in. He feels he’s earned a solid standing with Uber and that they listen to his feedback. At a recent meeting, drivers were told that for the next 180 days, Uber was going to focus on making improvements for drivers. “Every 30 days there is going to be a new collection of announcements for drivers that Uber will have. About a week ago, as part of the 180 days, one thing they announced was changing the wait time from 5 mins to 2 mins. It’s great for drivers. It means less time I’m sitting doing nothing. Additionally, we now have paid wait time — if you’re my rider, and I’ve connected with you and know you’re coming, but you’re running late, I can get paid while waiting for you.” 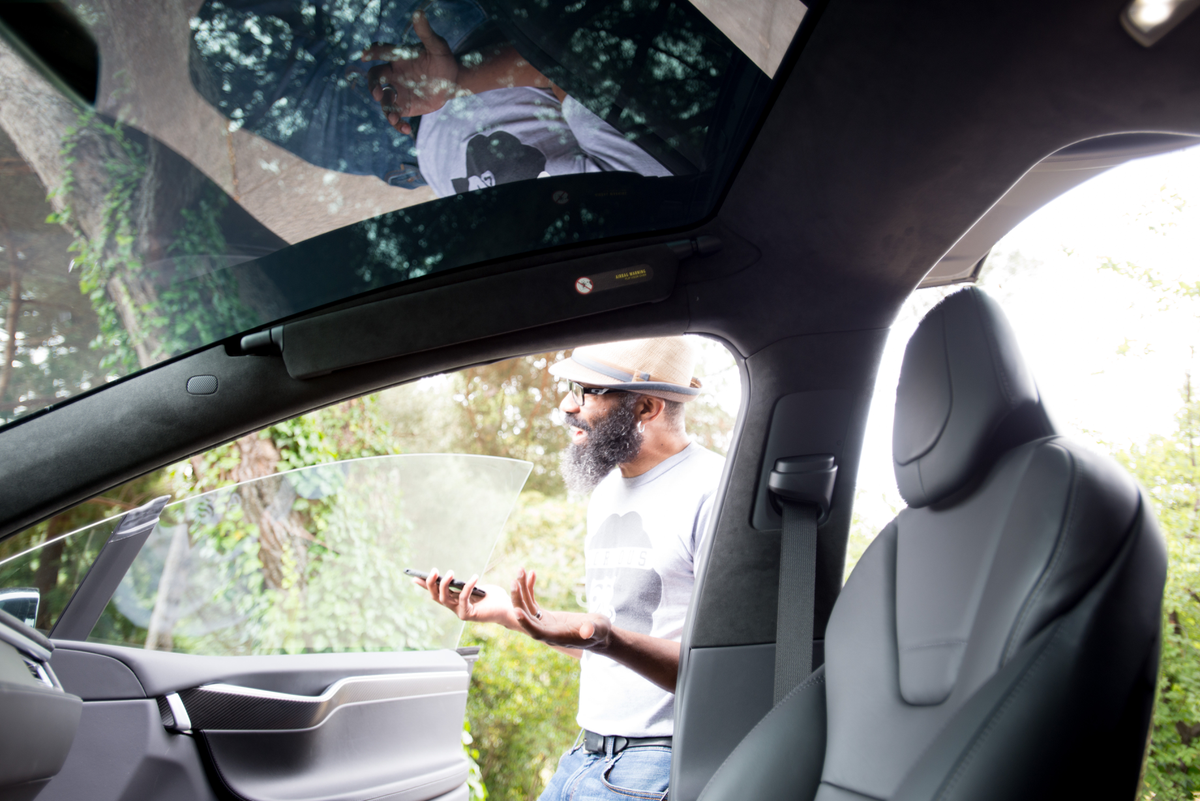 Kindred has 2 kids, and like me his oldest is 20 years old (mine will be 20 next month). We joked that we felt too young to have adult children. Kindred is a full-time Uber driver and doesn’t do other work outside of Uber, but has a ton of different passions. He says, “I’m a jack of all trades, a master of none. And it turns out that has been really helpful. Because I’m able to talk about pretty much any topic when I’m in the car. I was a choreographer for years. I love music. I love dance. I absolutely love the film industry. I enjoy photography. People love my Instagram (@kindredisme) — I’ve been told I have a good eye. I love interacting with kids. I am a firm believer in Jesus Christ. It’s funny to hear people reference that if they themselves aren’t believers — people who aren’t believers will make generalities about my belief like, ‘he’s spiritually enlightened’. But that’s not what I said. I said: I’m a firm believer in Jesus Christ. Jesus had an agenda. He came to save the world. The way he went about that agenda we all could learn from.” 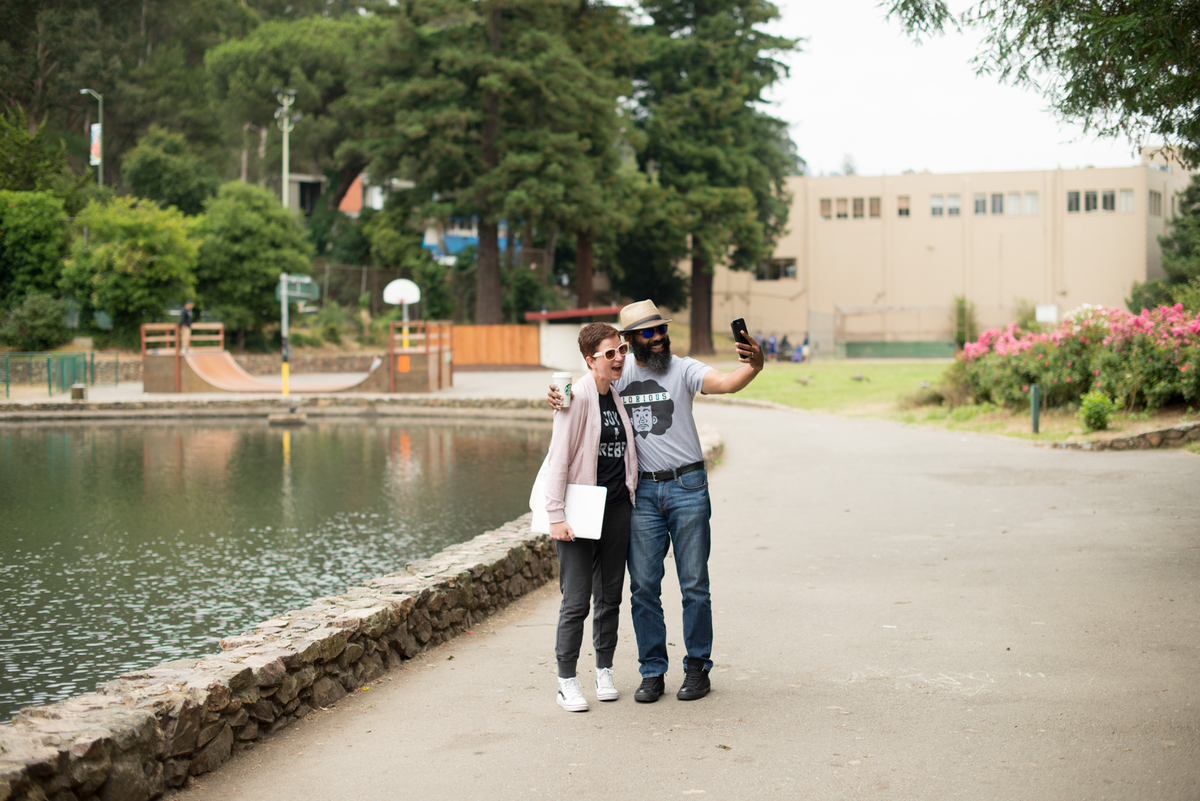 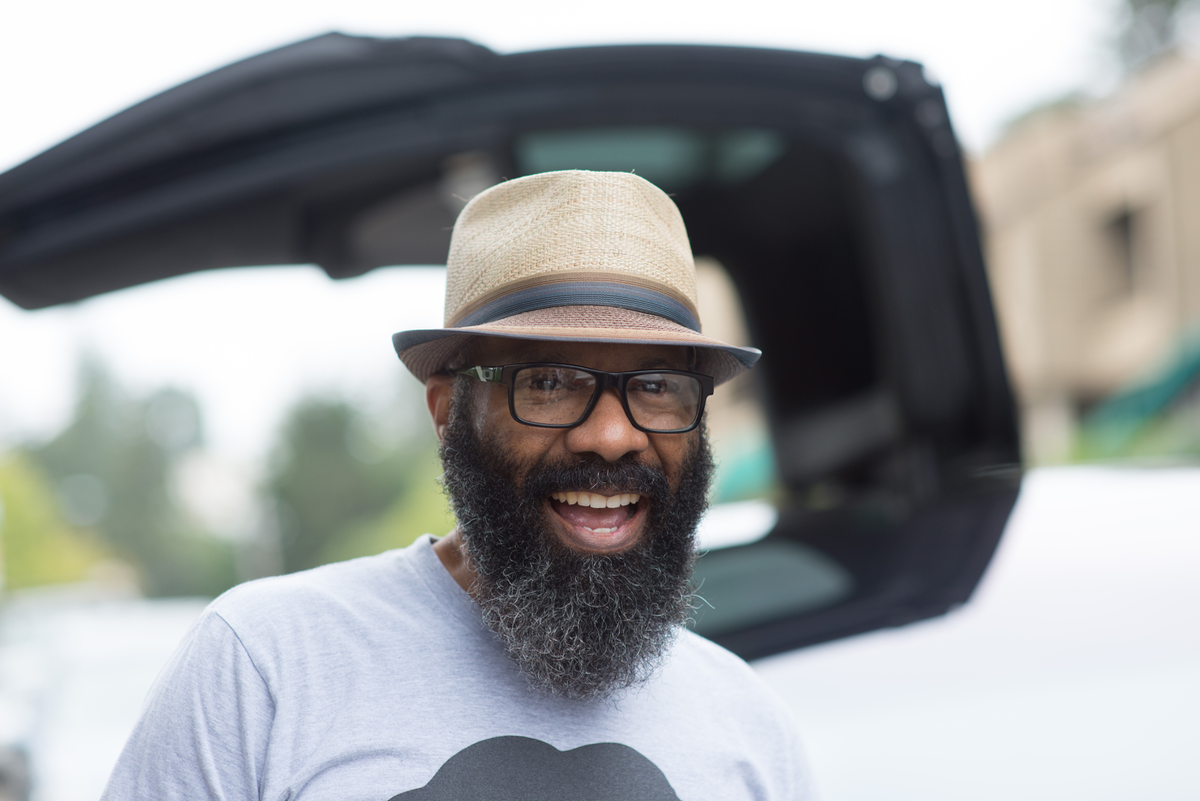 Spending a couple of hours chatting with Kindred was a delight. He really does understand the art of conversation and I can see why Uber has been such a good fit for him.

Now it’s your turn. What are your latest thoughts on Uber? I see the changes as proof the company is committed to improving the Uber experience for drivers, for riders, and for their in-house employees too. Do you see it the same way? Regarding the interview, is there anything about Kindred’s experience that surprised you? As you know, I’m already an Uber customer, but seeing how much he loves driving for Uber, and how many opportunities it has given him, made me happy. Plus, I loved his advice to never compliment women as an Uber Driver. Hah! It’s so true. No matter what the compliment is, it’s bound to sound a little off, right?

P.S. — As soon as I publish this Uber driver interview, I’ll be sending the link to Kindred. Hopefully I don’t need to remind you, but just in case: no personal attacks. Kindred is a real person who will really be reading what you write.

Credits: Photos by Kristen Loken for Design Mom. This post is sponsored by Uber.