All In The Details — by Guest Mom Kristy Glass 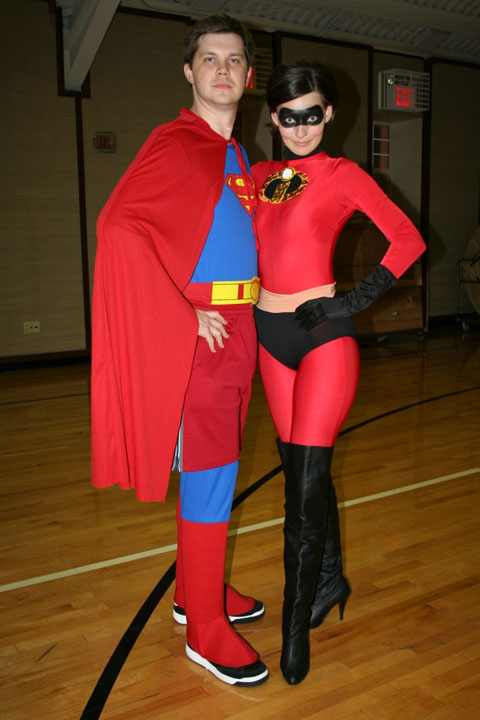 When the store-bought costume is not doing it for you, you gotta take things into your own hands. When I decided; “I am going to be Mrs. Incredible,” and I found Disney’s Mrs. Incredible costume online to be UNcredible, I needed to take matters into my own hands.

I pulled up an image of Mrs. Incredible from the Pixar film and compared the two side by side: What? Horror! I was amazed at how lame Disney’s offering was. 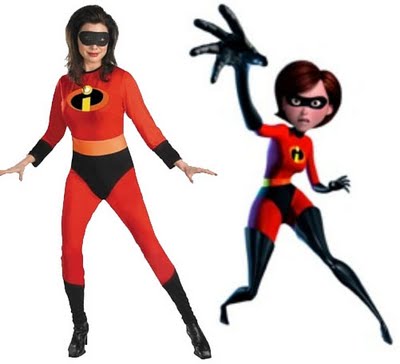 The boots were not tall enough, neck too thin, and where are the gloves? I started staring at this cartoon picture and trying to figure out how my non-seamstress self could make my own costume.

I ordered black gloves, black briefs, black tall boots and a full-body red unitard. I stopped by the fabric store to get some orange and black stretch fabric to add to the waistband and neck of the unitard. I also picked up some felt and glitter to create the “i” graphic on the chest.

My sewer friend whipped that orange waistband on the briefs and the black on the outside of the neck. I spent an evening burning my fingers (literally) glueing that incredible logo together. The last thing I needed to do was order the black makeup from Ben Nye, and voila! I had a much more incredible costume then the store-bought, and for around the same price.

As an added bonus, I already had a short sassy hairdo similar to Mrs. I, and the big booty to boot! 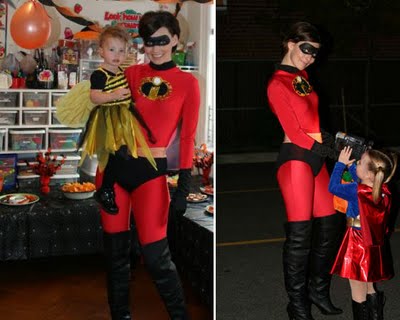 I know this is a good costume because 4 other friends have borrowed it. I have also worn it for school appearances at my daughter’s schools and sometimes the prospect of wearing that costume again someday in the future, is all the motivation I need to do my morning workout.

This year I have used the Mrs. Incredible Model to put together 2 costumes that I am pleased-as-punch about.

My daughter will be Olivia Pig, from the Olivia books by Ian Falconer. Her outfit is modeled after the illustration on the cover of Olivia Counts. Each piece (striped tights, striped shirt, white blouse, jumper) will be worn the rest of the year as separates and together for upcoming holidays (Christmas, Valentine’s Day). I had no guilt purchasing these items as they will be worn again! (Unlike the Judy Jetson store-bought catastrophe that looks cute but wears MEH, that my other daughter insisted upon purchasing!)

I had to make the ears and for fun I made a duct-tape purse to go with it. I enjoy having a little hand-made bit of the costume, preferably one that does not involve me sewing. 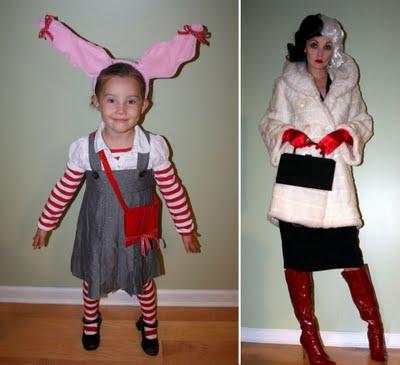 Also this year I have used the Mrs. Incredible Model for my own costume. I chose to be Cruella Deville, circa 1960’s. I bought each piece off ebay: red boots, red gloves, black vintage dress, white furry coat, wig. After studying the cartoon drawings of Ms. Deville, I decided to get some green jewelry as well. My good friend etsy helped me find just the right set of earrings and a ring.

So, there you have it! Incredible Costumes, to make your Halloween the most memorable!

Find more from Kristy at her blog Glass Posse.