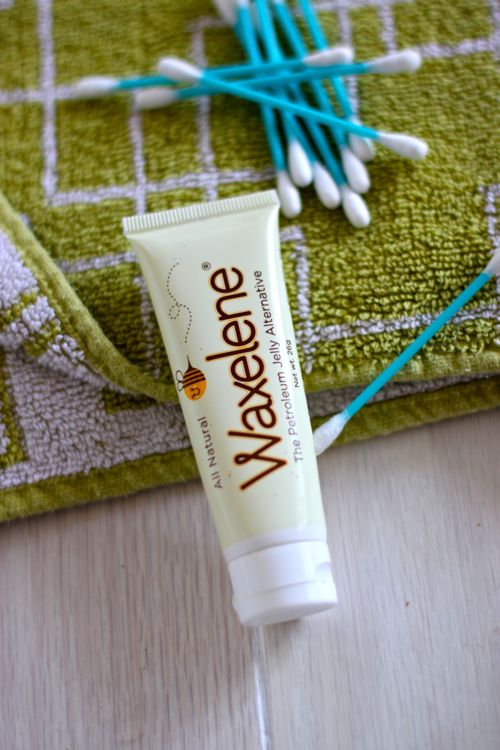 I’ve mentioned having my cleaning routine greened up. But it turns out I’ve greened up my beauty products over the last six or seven months kind of by accident. Years ago, when I lived in New York, my friend Sara Stratford told me about an article she’d read on the dangers of using petroleum products on your skin, and how she was having a hard time quitting her favorite lip balm. But I confess, I mentally plugged my ears at the news. Because Vaseline — straight up petroleum jelly — is the pharmacy product I probably use most. I use it to take off my makeup, and I use it on my lips right after I brush my teeth and before I put on lipstick. I also use it for extra-dry patches of skin, on sore noses, and to soften up heels and elbows. It seriously gets multi-times-a-day use at my house.

So right then and there, during the conversation with Sara, I pretty much abandoned any thoughts of greening my grooming routines because I couldn’t imagine giving up Vaseline.

Then, years later, and a few months before we moved home from France, I happened upon an ad for Waxalene, which was billed as a petroleum jelly alternative. I was skeptical, but made a mental note of it. And once we had moved back, during a visit to Whole Foods I noticed a basket of Waxalene tubes and decided to give it try.

Turns out it looks, feels, and functions almost exactly like Vaseline! So all of a sudden I was no longer dependent on my trusty petroleum jelly. Kind of game changer for me. I still have have used bottles of Vaseline that I imagine I’ll probably use up (the waste kills me!), but I’m fully on board with Waxalene now. 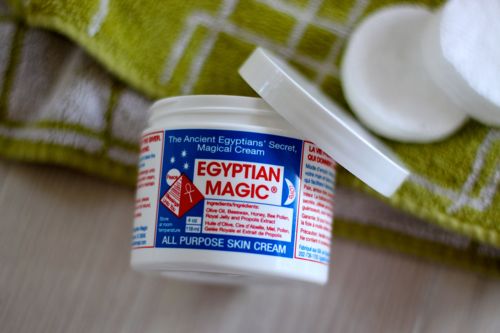 Then, during Alt Summit NYC last June, Mara (who is very conscientious about seeking out the most safe and pure beauty products), brought me a jar of Egyptian Magic body cream. Though I was delighted to have a new beauty product to try, once again I was skeptical. The ingredient list is lovely, but the jar describes the cream as magical. I mean, come on!

In my childhood home, there was a high shelf around our dining nook, where my mother put together a display of antiques — nothing valuable, the collection was made up of inexpensive, but very old household items. And among them was a bottle of Dr. Sloane’s Liniment that promised to cure almost anything.

When I saw the description on Egyptian Magic bottle, I couldn’t help but think of Dr. Sloane. Hah! 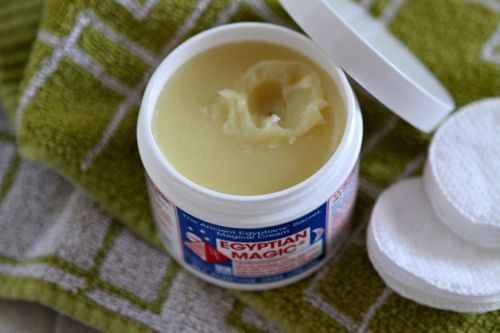 Anyway, I did try the cream, and it turns out I love it. Like love it! In fact, the jar pictured here is a replacement that I just ordered the other day, because my original bottle is almost used up. I like this cream as a general body lotion, and I use it as my facial moisturizer each morning. I rub a bit between my hands and then apply it. It feels almost greasy as it goes on, but then absorbs beautifully and leaves my skin super soft. Plus, you hardly need any at all! So the first jar has lasted me since June 2013 (that helps take the sting out of the price, at around $30 per jar it’s not cheap).

I bought my replacement bottle on Amazon (some of the reviews made me think I would receive a fake, but the one I was sent is identical to the first jar, so I think it’s a legit listing). The only negative thing I have to say about this product is that the printing on the jar starts to come off after awhile. Not a big deal, just odd. I’m so, so glad Mara introduced me to this product. It’s become a big time favorite. 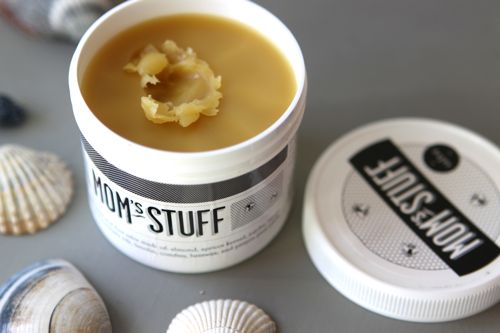 Lastly, I’m still going strong on my love affair with Mom’s Stuff, which I bought on a curious whim in July 2012. I’ve written about Mom’s Stuff earlier here. It’s handmade of the best ingredients, in small batches by an artist named Lee Bennion. I use it on my hands when they’re sore from too much cleaning. I use it on cracked heels and dry elbows. When I need something really strong and protective for my skin, Mom’s Stuff is my go to.

Again, one jar lasts a long time! I’m almost finished with my first one and I’ve had it for about a year and a half.

So there they are, some of my favorite safe and natural beauty products. I didn’t set out to improve the products I was using, but I’m so glad it has happened anyway! I’d love to hear if you’ve tried any of these yourself, or if you have other body-safe products you love. And I’d also love to hear if you are like Mara, and have sought out healthier products, or if you’re more like me and haven’t really given it as much thought as it probably deserves.

P.S. — I haven’t completely greened my routine. Not at all! I’m still using lipsticks that may or may not have lead. And there are still some French products I can’t seem to quit (and I have no idea what their green factor is, if any). The Nuxe Huile Prodigiuese and the Bioderma Makeup Remover are still staples in my routine!

P.P.S. — Speaking of grooming routines, I’m still working on my post about oil-pulling. Watch for it soon!