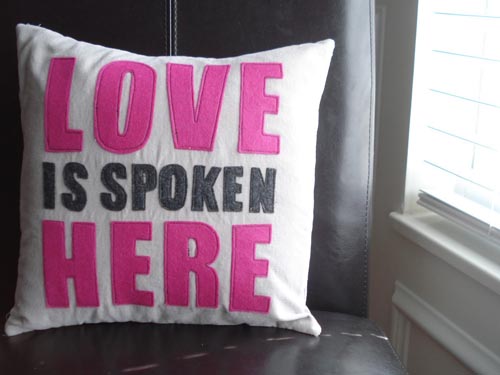 Hello Friends! We are having such a good time with our cousins. Everyone is in the backyard right this minute eating giant banana splits. I had to sneak away to quickly say hello. I hope my ice cream is still waiting for me when I’m done. : )

While we enjoy our houseguests, here are a few things I’ve been wanting to share with you:
– Clever Amanda made a Spooky TV.
– What a sweet pillow.
– I think I would love a moss carpet.
– Thanks and Sorry lights for your car.
– Should I laugh? Should I cry? There are no words for these costumes.
– The cutest mummy shirt. (DIY!)
– Your kids can send an image to be hung on a Turkey/USA Friendship Tree.
– For her 10-year anniversary, Stephanie trashed her wedding dress.
– Don’t miss the generous Fracture Giveaway — your photos will be printed, framed and ready-to-hang.

I write a daily post for Babble.com. Here are this week’s posts:
– My thoughts on Gap’s odd new logo.
– Free labels for your Halloween party drinks.
– DIY Halloween treats from Amy Atlas.
– Spooky music from Count Crow.
– A Halloween outfit for your paperdoll.

Have a wonderful weekend! I’ll see you back here on Monday. I miss you already.