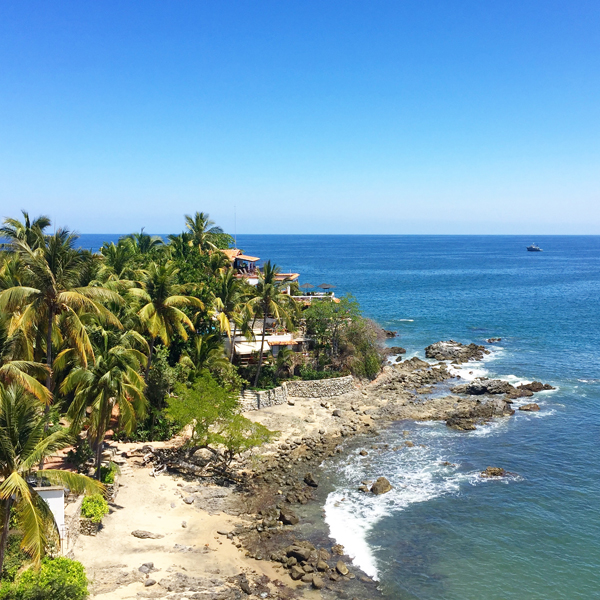 Hello, Friends! How are you? I arrived home last night after a few days in Sayulita, Mexico. You can see photos of the trip on Instagram and Facebook. It was a work trip, and I worked hard — lots and lots of meetings and planning — but the location was so spectacular that it definitely felt like a vacation too.

I attempted a Facebook Live broadcast yesterday before I left to tell you all about it. Here’s one attempt from my hotel room, it’s the most clear, but it cuts out after 11 minutes — watch it to see the cute souvenirs I bought! The official alternate attempt is here — and I made it through the whole thing, but the voice and images don’t sync up well, so you might want to just listen. I’ll embed it below.

This is what I talked about in the broadcast:

1) The stunning hotel I stayed at. It’s called Amor Boutique Hotel, and I was in a 3 bedroom indoor/outdoor suite with a full kitchen and living area and 4 full bathrooms and spectacular views. I’m dying to come back with the whole family. My suite was called Villa Arboles — you can see photos here, and I did a little video tour that you can find here.

2) At about the 20 minute mark, I talked about the England School post and how you let me know I titled it very, very wrong (and that I agree).

3) I talked all about my spray tan — I got my first one for this trip and I’m basically obsessed now.

4) I read The Handmaid’s Tale while I was in Mexico and talked about that too. Have you read it? Thoughts? Are you going to watch the TV series?

5) And I also talked about the Iris Awards. I was nominated for Live Stream of the Year! If you’ve ever been to Mom 2.0, you can vote.

And now I’m back, and I have a long list of links for you. Here are a few things I’ve been wanting to share:

– “It wasn’t that women over-apologized, and it wasn’t that men under-apologized; both genders gave apologies whenever they believed they had done something wrong. Men were less likely to believe they could be wrong.”

– Straight out of a sci-fi book. Using blood from young people to fight aging.

– A robot that fills your home with sunshine.

– An untouched Frank Lloyd Wright home is on the market.

– The Japanese practice of “forest bathing” is proven to better health.

– I had no idea Island of the Blue Dolphins was based on a real woman.

– An interview with the white woman who identifies as black.

– Artists are re-drawing their old work to see how much they’ve improved.

– A letter of apology to a son graduating from college.

– The California wildflowers are so insane this year you can see them from space.

I hope you have a gorgeous weekend. I’ll meet you back here on Monday. I miss you already.