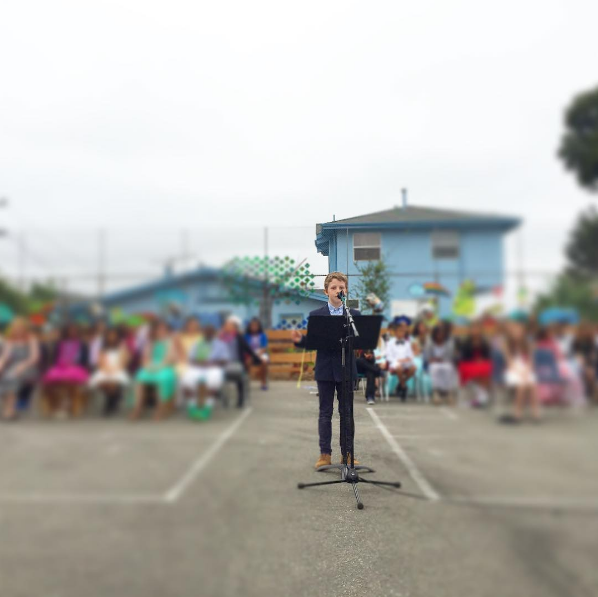 Hello, Friends! Happy Friday! Today is the first day of summer vacation, and every single member of the family slept in. It was heavenly.

It’s been an epic week. Ralph hit some major, major deadlines, had two full days of shooting, and lots of driving lessons — he’s committed to getting his license before we go to France. Maude finished her classes and student council responsibilities — with exams right through yesterday. She’s feeling emotional about saying goodbye to her senior friends. She herself will be a senior next year and we can hardly believe it.

Olive had an 8th grade promotion ceremony — during the program she gave an introduction in French and sang in the choir. (And did a fantastic job at both!) She’s headed to high school next year and is feeling teary-eyed about the big change. Oscar had a fifth grade promotion ceremony where he gave an excellent speech and had the whole audience in stitches. He heads to middle school next year and is feeling nostalgic and a little melancholy because he can feel how quickly he’s growing up.

Though she was allowed to leave school early yesterday, Betty wanted to stay until the final bell rang. She loves school much more than summer break. Saying goodbye to her friends for the summer just about kills her. June had a kindergarten promotion ceremony. It was adorable (as all kindergarten activities are), and I’m trying to wrap my brain around the fact that our family is done with kindergarten. Unfathomable.

Oh. And Alt Summit registration opened up yesterday, and then sold out by the end of the day!

And now, my attention is turning to our summer in France. We head out so soon! Today I want to work on a basic itinerary, confirm our accommodations and car rentals, and make a list of goals for our time there. But before I get started, here are a few things I’ve wanted to share with you:

– Are you okay with other adults telling your kids what to do?

– Hah! How to make toast for a toddler.

– A period ad that positions blood as a strength not a weakness. Thanks, Alison.

– Silly, but made me laugh – the real reason your food takes so long at restaurants. (Some cussing in this one.)

– Why talented Black and Hispanic students can go undiscovered. (NYT)

– Whaaaa!? These Japanese students hatched chicks outside their eggs.

– LA is turning old hotels into apartments for homeless vets.

– A little dose of nostalgia for anyone in my age range.

I hope you have an excellent weekend. I’ll meet you back here on Monday. I miss you already.