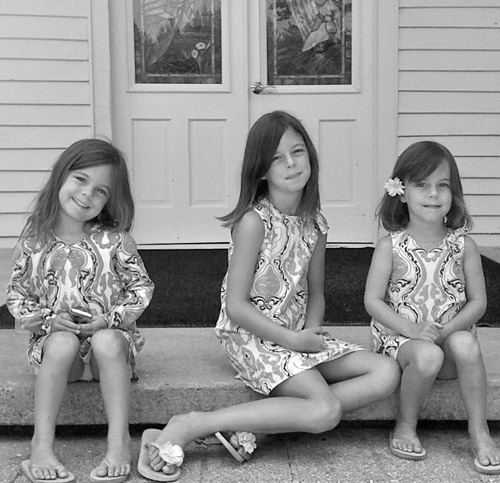 In December in Budapest, it’s cold. I mean, really cold. And on December 5th 2001, the roads were snowy and ice hung from the trees. I was 9 months and 10 days pregnant with my first child. A girl we had named Reagan. It was a good pregnancy. I took yoga, ate well (and plenty), and loved being pregnant. But like all overdue moms, I was ready.

My mom had flown in to be with us and rented an apartment nearby to help for the first few weeks. The nursery had been prepared. Our small apartment on the tree lined street Falk Miska on the Pest side of Budapest was filled with bottles and diapers and a custom made crib.

My doctor, Dr. Kostin, believed in natural birth. So when he called me to say he was sending us to the hospital to be induced, I was surprised but he said it was time. In Budapest, you don’t want to give birth at the State hospitals. There you have to take your own diapers, blankets, pads, everything. There is nothing given to you and it’s a very sterile, pre-war like environment. We chose a private clinic that was brand new just outside of Budapest called Telki hospital.

It’s modern & more like a spa than a hospital. We were all nervous as we drove the 20 miles in the snow to the hospital. We checked into a huge room with two twin beds, a large TV, and fresh flowers. A few minutes later, a bow tied man appeared to take our room service order. Really? Room service? Ok I could get used to this.

A few minutes more & they wheeled in a rather odd looking machine. In my broken Hungarian, I could understand that the doctor has ordered this to start my labor. But what was it? The nurses then proceeded to tell me to take off my bra. Yes. That’s right, Folks. It was a nipple simpulating machine that would clamp on & twist & hopefully start labor naturally. No way. No American book had prepared me for this. My husband was so embarassed he left the room. 10 minutes into the ‘procedure’ the nurses declared it was not working. They then called Dr. Kostin. He arrived a few hours later & informed us that early the next morning, he would break my water.

In the meantime, we were served dinner (from a real kitchen, not cafeteria food) in our room & given our chose of DVDs for the night. It was like a night at a getaway at a 4 star hotel!

At 5 a.m. Dr. Kostin broke my water & labor came. With Reagan, I had back labor. Bad back labor. By 3 p.m. I was ready for my meds. Getting an epidural in a former soviet block country scared me. But the doctors and staff were amazing, kind, and walked me through it. At 5 p.m. we were ready to bring Reagan into the world. I pushed for 45 minutes. Nothing worked. I was exhausted. Then they discovered the cord was around her neck & Dr. Kostin told me it was now or never. If I didn’t push her out in the next two pushes, he’d have to take her. He even told the baby that while she was still inside me and I believe she listened.

Less than 10 minutes later, at 5:55 p.m., she came out with her eyes wide open with a full head of black hair. She was beautiful and pink and 8.6 pounds of sweetness. She never cried. She just looked around out into the room, into my eyes, out into the world as if she was some old soul. Her eyes were as dark as her hair & the nurses nicknamed her Black Beauty. 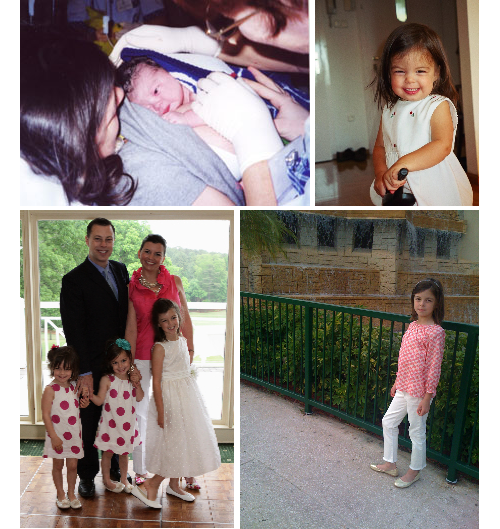 She’s now 8 years old & the joy of my life. She has twin sisters who are 4 and so lucky to be loved by our Reagan. We left Hungary 3 years later but Reagan has a strong belief that she is actually part Hungarian. She loves hearing the story of her birth and says, “Why did I have my eyes open?” To which I reply, “Because you wanted to see all the people who loved you so much already.”

From Jade of Pretty Pieces.

Note from Design Mom: throughout my pregnancy, I posted advice, memories and stories about pregnancy, childbirth, adoption and growing a family on Wednesdays. My baby has now arrived — here’s her birth story and her newborn photos — but the series has been so popular that I’m continuing it indefinitely. You can find all the stories in this series by clicking here. Have a story you’d like to share? I’d love to read it. You can send it to me at gabrielle@designmom.com.