A Birth Story from Rebecca Legates 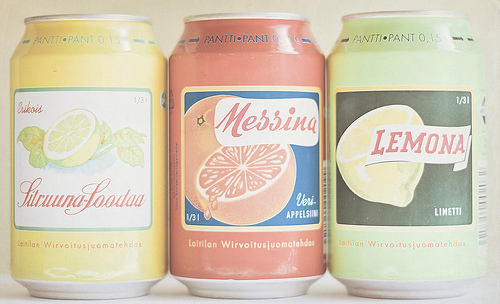 image via Mary Ruffle (it has nothing to do with the post, but I thought the soda cans were so pretty!)

THE SHORT AND SWEET:

Baby girl was born on April 22, 2009 at 9:42pm, after a half hour of labor. Place of birth was marked by the large stain on the antique oriental rug in our living room. Time of birth was estimated by the 911 operator who received our call at 9:44pm, just after the birth. Mom and baby were transported to the hospital to recover, where they were met by dad (after he dropped off big sister Mira at the grandparents). Mom’s recovery was complicated by blood loss, and eventually involved five days at the hospital, two blood transfusions, a CAT scan, loads of IV fluids and iron, a visit from a neurologist, and gobs of painkillers. Eventually the headache has come under control (with the expectation that it will go for good in a few days), and we all went home a happy family. No babies or moms were ever in any serious risk during the above proceedings.

THE GORY DETAILS (not for the faint of heart!):

THE BUILD-UP: Only existed in retrospect, but was not obvious at the time. For the week prior, mom had been feeling fairly uncomfortable, but not painful, Braxton-Hicks contractions, at regular 10 minute internals, on and off. After the first day we packed everything for the hospital, fully expecting to go in the middle of the night. Of course mom slept like a log, that night and every night that week. The next doctor’s appointment was Thursday, April 23. Official due date was April 28.

THE DRAMA: Wednesday, April 22 was very much like all the other days. Mom picked up Mira from daycare at 5:30, dad came home with take-out Chinese for dinner, Mira went to bed by 9pm.

Just after 9pm, mom felt the first real and obvious contraction, and said “that was real!”. Dad froze like a deer in headlights, and/or wanted to see if the next one was 10 minutes out. Mom had a few more over the next 10-15 minutes, and they started to get a bit stronger and closer together (this was not communicated too clearly to dad). Dad managed to call the grandparents to tell them to meet us at the hospital to pick up Mira. Mom then had a long clearly serious contraction (clear even to Dad) in the bathroom. Dad started staging random stuff (‘cepting the Mira-bun) at the front door.

A few minutes later, mom was in the living room, on hands and knees, thinking about how to get to the car. Dad was looking for his glasses (both pairs has gone AWOL, contemplating using the three year old edition).

—said “maybe we need to call an ambulance” out loud, uncertain if dad was actually in hearing range

She moved over to the couch, kneeling on the carpet with elbows on the couch, anticipating the next contraction. It came within a minute, was equally strong, and this time she felt a very strong downward pressure (like a baby’s head moving down into her pelvis)

—thought “I think the baby’s coming!”

—said “I think the baby’s coming!”

Within a minute the next contraction came, and along with it, the baby’s head, then the rest of her.

Time of birth was 9:42pm, labor was a total of a half an hour. Mom sat down and picked the baby up, put her on her chest. Dad started looking for the phone and called 911:

“What is the problem Sir” (heavily paraphrased)

“We just had a baby”

“We just delivered a baby, we need an ambulance”

The ambulance showed up within two minutes (go San Leandro!), and five very large, awkward EMT guys crowded into our living room. They checked all our vital signs, and offered to let dad cut the cord (Um, I don’t think I need a sharp thing in my hand. ‘Sides, I was supporting mom and baby). Baby and mom rode to Alta Bates in the ambulance, dad stayed a few minutes to pack the car, and load Mira for a drop off at the grandparents (Mira blessedly slept through the whole episode). The neighbors, notified by flashing lights, helped him scrub the blood stain out of our antique oriental carpet. He arrived at the hospital a little bit later.

THE TRAUMA: During the ambulance ride, mom started to feel dizzy and chilled. She still hadn’t delivered the placenta, and continued to bleed. At the hospital, a midwife and two on-call doctors helped her deliver the placenta, which ultimately took an additional two hours (narrowly avoiding surgery), although more blood was lost. Baby was thriving, and mom and baby and dad were eventually moved to a normal recovery room.

COMPLICATIONS: During the night, mom started to develop a headache. By morning it was fairly severe, and her first attempt at using the bathroom resulted in a dizzy spell and passing out on the toilet. Blood tests were taken, and her hemoglobin was down to 7 (normal is 12-14, don’t know what the units are). In the course of the day it was decided to give mom one unit of blood, to help with both the dizziness and the headache. By Friday mom felt significantly stronger, and the Ibuprofen had kicked in (Vicoden was useless), and we were able to have visitors, including big sister Mira (who was entirely charming). However, the headache did not go away, and soon stopped responding to the medication. At full-strength, it was incapacitating, only a step or two below a full-blown migraine.

The doctors ordered a CAT scan to help rule out any neurological problems, and the results were fine. One more unit of blood was given on Saturday. A passable schedule of Ibuprofen and Percocet was established that managed to keep most of the pain at bay. However, Sunday morning came as worse as ever. Finally, a neurologist was called in (took till late afternoon) to examine mom, and concurred with the rest of the doctors that headache was due to blood loss (and catch-all excuse of hormone shifts), rather than anything more serious. He prescribed some additional anti-inflammatory steroids to reduce the persistent pain, and the plan is to allow the body to heal itself by rebuilding blood cells.

An additional side effect of the blood loss is that mom’s milk has been delayed, although baby is a champion nurser and instinctively knew how to latch on. We’ve been feeding using SNS (supplemental nursing system, involving formula and a thin tube sucked alongside the nipple) in an attempt to get mom’s milk to kick in. The jury is still out at day six, but the lactation consultant said don’t give up before a month.

WE WOULD LIKE TO THANK THE ACADEMY: The nursing staff at Alta Bates are phenomenal. In particular, two nurses, Jo and Bronwyn, took it upon themselves to be my personal “patient advocates” and each spoke directly to my doctors about being more aggressive in my treatment (as they saw how much I was suffering). Bronwyn even called on her day off to see how mom was. Every other nurse we saw was wonderful, and we thank them all.

The EMT guys were also fantastic. They arrived lickety-split, reassured us that we were all ok, and at least one of them really knew what he was doing (and the others were great at following his directions!)

Huge thanks also to Grandma and Grandma, who went through trial-by-two-and-a-half-year-old. We had no expectation of staying that long at the hospital, but they rose to the task admirably. Mira had a ball with them, and we were blessed with time to recover and focus for a few days on the new baby by herself. On day two they thought maybe Mira was getting a cold (in fairness, her daycare mate caught a pretty bad something that left spots on his mouth) cause she was being contradictory. Nooo, you now see the other side of Mira!

Also huge thanks to Oma, who bought a last minute ticket from Vancouver to be with us at home for the first week (canceling a myriad of social engagements and preparation for her big trip to Spain on May 7). She’s already proved herself invaluable.

A final shout-out to the neighbors who gathered late in the evening to help scrub blood out of our antique rug. Couldn’t have done it without you!

P.S. — Ashlea has a hopeful and heartbreaking birth story to share.

Note from Design Mom: throughout my pregnancy, I posted advice, memories and stories about pregnancy, childbirth, adoption and growing a family on Wednesdays. My baby has now arrived — here’s her birth story and her newborn photos — but the series has been so popular that I’m continuing it indefinitely. You can find all the stories in this series by clicking here. Have a story you’d like to share? I’d love to read it. You can send it to me at gabrielle@designmom.com.