A Birth Story from Helen Burridge 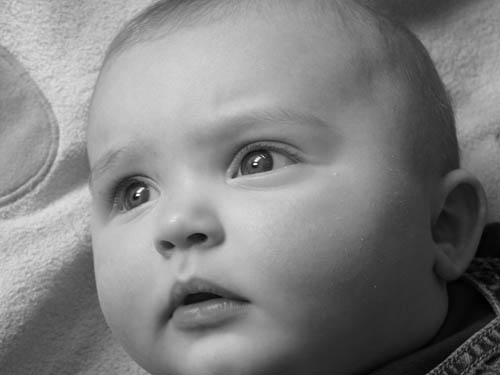 My birth story ought to start with a bit of an introduction. My husband is a paediatrician and for the last two years has been working with the very small and very ill babies resulting from premature and traumatic (or problematic) births. Having braced ourselves for a long period of attempting to conceive, we were overjoyed and slightly taken aback when success came in the form of a peed-on-stick after only four months post-wedding and 5 weeks off the pill!

Since then, his experiences (and medical knowledge generally) have impacted considerably on my pregnancy and the decisions we made leading up to the birth. In some cases, a little knowledge can be a dangerous thing. With my husband, a large amount of knowledge was very dangerous indeed: he was anxious and over-informed for most of the nine months. With my artistic background (and general unease around most things medical and sanitised) we were clearly going to be approaching the delivery of our first child from very different directions!

The midwife-led birthing centre at our local hospital was the obvious choice. Unlike other birthing centres in the country, the paediatricians (and general medical intervention in the event of emergencies) were on hand, on site, rather than in other buildings, or worse, other towns. I wanted to try for as ‘natural’ a birth as possible, but having heard about (and in his case been present at) all the various scenarios and potential risks, in truth my birth plan was ‘Get the baby out safely’ and the rest was ‘wait and see’. And so December arrived and with it, our due date…

Three days before our little girl was due, I took a walk with a friend to a local café for lunch. As I tucked into my jacket potato, a wave of discomfort and cramping across my abdomen took my breath away for a good couple of minutes. The sight of a heavily pregnant woman clutching the table with closed eyes and concentrated breath did cause rather a stir and once it passed, we finished our food and staggered home. Nothing more happened that day or evening, but the next morning, ‘just to be on the safe side’, I rang my mother and suggested she bring forward her trip to us forward by a couple of days to start ‘babywatch’ early… just in case. I continued to plan for mince pie baking, Christmas tree purchasing and so forth, convinced that I’d cried wolf. She arrived, we had dinner and retired to bed, ready for shopping and general mum-fun the next day.

Sitting in bed, baby book in hand, a small gush emitted onto the sheets, of course widely missing the maternity sheet we’d sensibly laid out earlier that evening! I went to the loo, and the leaking continued. For the next hour. Telephoning the birthing centre, we all dutifully re-dressed and drove over to the hospital to be checked and confirmed unstained and in order. Returning home at 1am, we settled in for the night, waiting for the contractions to start. They obliged and for the rest of the night, my husband and I sat, knelt, stood and squatted with the pains, increasing in frequency until they were two every ten minutes by 6am.

The city ring road traffic is renowned and I was anxious not to give birth in the shopping centre park. We telephoned the hospital again, and were given the all clear to make our way back to the ward and see how far I had progressed. I hoped to use the birthing pool and had to be at least 6cm dilated before I was allowed to get in and enjoy its warm comfort and ‘pain relief’ (ha ha)… Upon arrival at 8am, after 6 hours of contracting, I was measured a mere 1cm. A bath, some tea, more contractions and by 2pm it finally came around to seeing how much further I had progressed. By this point, I had been having a contraction every three minutes for the most part of 12 hours and was horrified to discover I was only 2cm dilated. The lovely midwife comforted me as I turned the air blue and sobbed. The ‘sweep’ was wildly uncomfortable and I was exhausted, bruised and scared. Although we knew dilation and contractions were not on a linear scale, only a further centimetre in 6 hours was dispiriting at best, but at worst, it meant that I would not make the 24hour, post-water-breaking window and would need intervention to move things along.

A shot of pethidine calmed me down from near-hysteria and hopeless gloom and the midwife helped me better control the unending wave of contractions. Rather than leaping from one yogic position to the next in the hope of diminishing the pain (and failing!), I was set up on the bed with a beanbag and stayed kneeling, falling into it every two minutes for the next three hours. The contractions didn’t hurt less, but I was now armed with the ability to survive each one more effectively.

We were finally progressing: it was time for the pool. We progressed some more: they started filling the pool. We progressed some more: I was allowed to undress and get into the pool. The latent phase had lasted nearly 20 hours and we were now in active labour. The midwives were excellent at considering my contractions, me, my husband and my mum, simultaneously ensuring that I was sufficiently medically and holistically cared for and managing all our expectations.

The lights were turned down, the water was warm, the gas and air was coming thick and fast and so were the contractions. I gripped the sides of the tub and thrashed in the water through each one. I was told it was time to get out the pool and start pushing but the effort and energy required to get out evaded me. I turned to my husband. ‘Will you divorce me if I give birth in a pool?’ He confirmed that our marriage would not be at risk if I temporarily took on the role of earth mother and the pushing began. The low ‘moo’ noise that we had been encouraged to practice in yoga (and which I had then been too embarrassed to emit beyond a peaceful ‘ommmm’) bellowed from the depths of my abdomen. There was a high-pitched sting down below and I panted the question, ‘Is it crowning?’… To which the rather bemusing reply came: ‘Almost, she’s just around the corner.’  What corner?? It continued…

With a rush of sting, hurt, groans, gripping, clenching and pushing, my daughter came swimming into the world at 8.45pm, nearly 23 hours after the waters broke, and in perfect health and fitness. She was immediately placed on my chest, and stayed there for fifteen minutes of warmth, cuddles and exhaustion while her cord was cut and my husband and mum looked on in awe. After such a long labour, we opted to deliver the placenta with syntocnon and, a few stitches and a hot shower later, was in bed with toast and tea and my little girl.

I can’t thank enough the splendorous calm and control shown by the ever-patient and thoughtful midwives throughout our labour. My husband remains in awe at his first experience of a complication-free and entirely un-medicalised birth. Six weeks on, the seemingly endless contractions along with the fear and anxiety are lost in a blur of breastfeeding and nappies. Six weeks on, though, I also have my daughter. And she is beautiful, calm and healthy. And we got the baby out safely.

Matilda Molly Anne was born at 20.45pm (three hours before her due date) weighing in at 7lbs3½oz. The records show labour as lasting 3½ hours. Her family begs to differ.

——-
Note from Design Mom: throughout my 6th pregnancy, I posted reader-submitted advice, memories and stories about pregnancy, childbirth, adoption and growing a family. My baby is hardly a baby anymore — here’s her birth story and her newborn photos — but the series has been so popular that I’m continuing it indefinitely. You can find all the stories in this series by clicking here. Have a story you’d like to share? I’d love to read it. You can send it to me at gabrielle@designmom.com.