A Birth Memory from Shelley Abreu 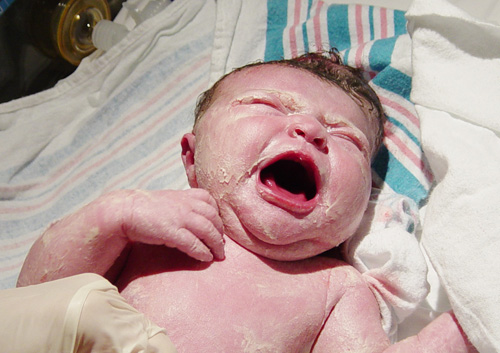 Julia has developed mucositis — a painful inflammation of the mucous membranes. Basically it means she has sores all along her digestive tract from her mouth to her bum. She’s on a morphine pump, and I can tell she’s miserable.

Martin Luther said “If you could understand a single grain of wheat, you would die of wonder.” I thought of this quote yesterday, and it made me think about my first time giving birth. It was such a brutal and magnificent experience all in one. I pushed for four hours with Julia. I was in agony.

When she crowned, the pain felt like fire moving through me. I was not focused on the delivery room. I was outside of myself. Then, with the final push, she arrived. And that surge of energy that moved through me was holy. God was everywhere. There was all this commotion and raw earthy energy, but when she came out all the noise in my head stopped and all the pain in my body vanished and for a second I felt like I glimpsed inside “a single grain of wheat.”

I was thinking about all of this last night as my first born was sleeping. I was thinking about her pain and how hard her journey is right now. I remembered that moment when she arrived — how there was a single second of time where I thought I understood everything.

Then I thought about right now – how none of this makes sense. The whole thing is painful and wrong and terrible. But maybe the sorrow and grief is in the single grain of wheat as well. Because all of it is connected to the way we love. Maybe I didn’t understand everything that day. Maybe you have to walk through sorrow to really understand how the universe works.

From Shelley Abreu of A Story About Faith. Shelley’s oldest child was diagnosed with cancer in 2010, then 16 months later she relapsed. This year she received a bone marrow transplant from a non-relative. You can read more of her story here.