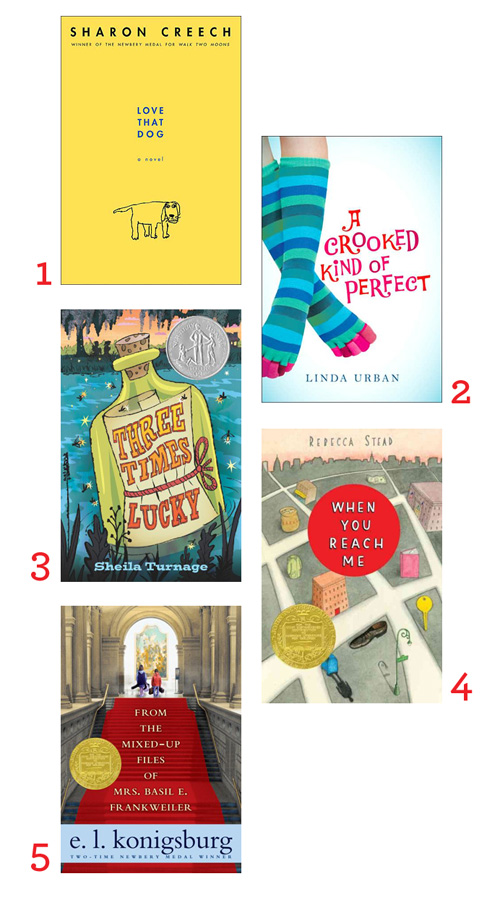 It’s about that time of year — summer slows down and the days inch toward back-to-school season. Are your kids bored yet? (Are you?!) Maybe you can squeeze in these reads that are perfect for the waning sun and sun-kissed days. These are the books that ripped out my heart and stitched it back up again. Some are old favorites and some are new, but they hold the stories of that age when you’re not quite a kid and you’re not quite something older. And they honor a time when nothing makes a lick of sense, but everything is important. These pages capture tenderness, angst, and a whole lot of heart. For someone like me, it’s a reminder, and for someone who’s not quite a teenager, it’s their reflection. These books say to that kid: I get you. You matter.

1) This read might require a box of tissues nearby. I’ve tried to read it without those tear catchers, but I don’t really recommend it. Love That Dog is Jack’s journal and his journey. He hates poetry because it’s not for boys. But he finds salve for the soul in the snippets of words that seize what means the most to him. It is a stunning read that will be over quick, but stick with you for about forever.

2) A Crooked Kind of Perfect is heavy on the perfect. It’s the kind you’ll want to read in one breath, and finish in one deep sigh. You’ll forget where you are because you’ll be so wrapped up in Zoe’s baby-grand-piano-wishes and organ-playing reality. Bliss, this book. Confident, this character.

3) Need something fast-paced, mysterious, and hilarious? Or looking for a character who is witty and gritty and wise? Three Times Lucky spins a tall tale through the pitch perfect voice of 11-year-old Mo LoBeau, whose heartache is masked only by her humor. Mo’s friendship to her named-after-Dale-Earnhardt pal is sweet and awkward, but the best kind of loyal and true. She’s another gal looking for a bit of home and a bunch of comfort.

4) Do you remember getting swept up in the wonder of A Wrinkle in Time? An homage to that time-traveling book, When You Reach Me is a new classic. The backdrop of 1978 New York City feels just as relevant as your own neighborhood, and sixth-grade Miranda’s struggles of school and family are gut-wrenching and real. But beyond the characters and their setting, its plot is intricately woven and the puzzle fantastic. As soon as I devoured the last page I immediately flipped back through, hunting for all of the things I’d missed in the mystery, skillfully scattered right in the way.

5) Once you read From the Mixed-Up Files of Mrs. Basil E. Frankweiler, you’ll peek for hiding places any time you are in an art museum. Claudia Kincaid is a heroine who is relatable, maddening, and fiercely loyal. This book has a complex sibling relationship, a mystery, and writing that goes down easy. Sublime, clever, and utterly endearing. 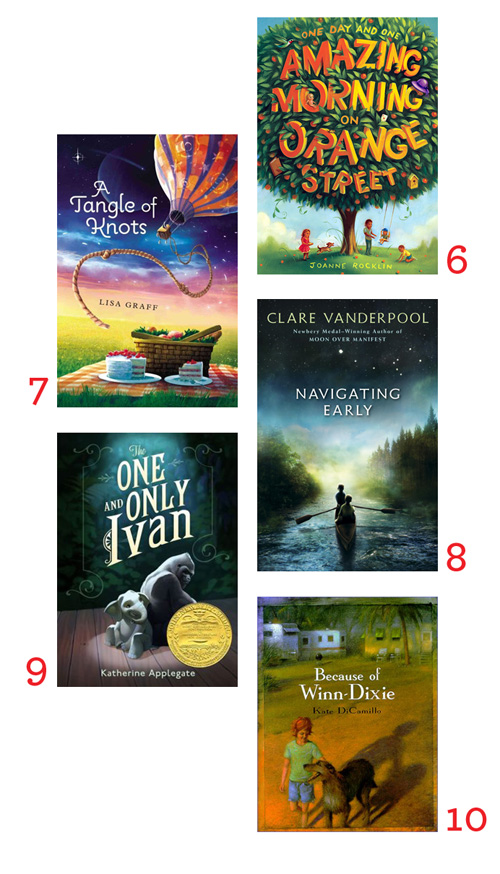 6) It’s enchanting, isn’t it, when a story tells simple truths and the stakes are heart-level? One Day and One Amazing Morning on Orange Street weaves together past and present tales, all rooted in one orange tree. It’s a stunning look at community and the shared situations that seem separate at first glance. And that cover? As delicious as the stories inside.

7) A Tangle of Knots is grounded in a world that is familiar, but has some magical elements swirling about. The chapters switch point of view among the quirky cast of characters, and each individual flavor is unique but connected. Before you realize what hit you, you’re solving a fantastic puzzle and will have a huge hankering for cake.

8) Similar to A Tangle of Knots, Navigating Early is a meaty, layered, and masterfully crafted story. It’s folklore wrapped up in epic adventure and sprinkled with a spot of tall tale. But for all of that bigness, two small boys and the things most dear to them are at its core. It’s set in foggy Maine and the confusion of wartime. It’s kids who need each other just as fiercely as they’ve been disappointed by the people who have left them. Pirates and pi, boarding school and a bear. A mystery. A must-read.

9) You probably have a bit of heart-space carved out for Charlotte and Wilbur, right? Tell some pig to scoot over, because Ivan and Ruby are going to take up a little room. The One and Only Ivan won the 2013 Newbery Medal, awarded to the most distinguished contribution to American literature for kids. A story about a silverback gorilla stuck in a shopping mall? From the perspective of that beast? Distinguished? Yes. So much yes.

10) Do you know India Opal Buloni? I haven’t forgotten her since the first time I read Because of Winn-Dixie over a decade ago. And I’m pretty sure she’ll be with me for a long while to come. Her story is bittersweet, but leaning towards the sweet. A patchwork and found family becomes her rock. And then there’s that dog — that smiling, sneaky dog.

P.S. — More of a fantasy fan? Check out Brandon Mull’s Fablehaven series or Shannon Messenger’s Keeper of the Lost Cities series — the second book is coming soon! And Tony Diterlizzi’s The Search for Wondla series has illustrations that are out of this world. Do you have other favorites? This list could have been about a billion numbers long!